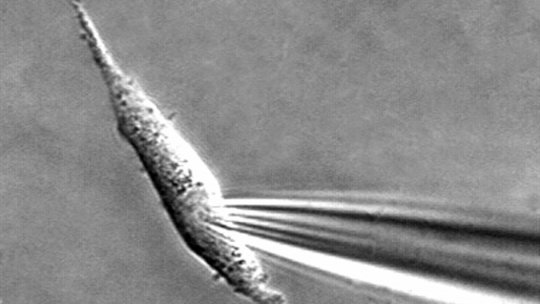 Image of a cell “ruptured” by a fire-polished micropipette
Image 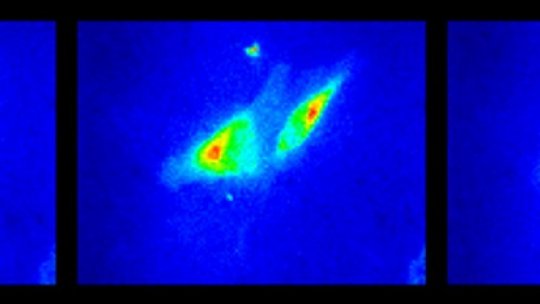 Researchers from IRB Barcelona and UPF have identified a chloride channel involved in cell volume recovery under osmotic stress.

The results have been published in the journal PNAS.

Cells have to constantly adapt to their surroundings in order to survive. A sudden increase in the environmental levels of an osmolyte, such as salt, causes cells to lose water and shrink. In a matter of seconds, they activate a mechanism that allows them to recover their initial water volume and avoid dying.

Finding out which genes are involved in surviving osmotic stress was the subject of a study led by the laboratories of Dr. Posas and Dr. de Nadal at the Institute for Research in Biomedicine (IRB Barcelona) and Dr. Valverde at Pompeu Fabra University (UPF), in collaboration with a group led by Dr. Moffat from the University of Toronto (Canada). wide-genome genetic screening, the scientists discovered the central role of a gene known as LRRC8A in cellular ability to survive osmotic shock.

This gene codes for a protein that forms channels in the membrane and that allow chloride ions to leave the cell. “Using a human epithelial cell model, as well as other human and mouse cell types, we have been able to demonstrate that this channel opens shortly after the cells are exposed to a high concentration of sodium chloride (NaCl),” explains Dr. De Nadal, who, together with Dr. Francesc Posas, heads the Cell Signalling laboratory at IRB Barcelona. The authors have also identified the molecular mechanism that causes this rapid opening. The chloride channel phosphorylates, which means a phosphate group is added to a specific amino acid in its sequence, thus activating the channel.

“This has been a very complex project, and it has taken us years to see the light,” explains Dr. Miguel Ángel Valverde, head of UPF’s Laboratory of Molecular Physiology. “We have also shown how vital it is for this channel to become activated and remove chloride in order to start the volume recovery process and for cells to survive over time,” he adds.

The use of a violet dye that stains only living cells has allowed the researchers to observe that cell death increases by approximately 50% when the activity of this chloride channel is blocked with a particular compound.

A journey through time to answer old questions

In the '90s, various landmark scientific papers on cell volume regulation described the process by which cells regulate their volume to survive. It was known that the proteins responsible for volume recovery under salt stress require low intracellular concentrations in order to become activated, but it was not known how this occurred under such adverse conditions. With this discovery, the authors have answered a question posed by researchers years ago: how does chloride exit the cell to start the whole process? In the words of the paper’s main co-author, Dr. Selma Serra (UPF): “Now we have the answer to that question. It is the LRRC8A channel that brings down the chloride levels in a cell. Until now we had a good understanding of the role played by this channel in cell adpatation to environments with very low salt concentrations. The big challenge was to find out how the same chloride channel could be crucial in the opposite mechanism. At the beginning of the project, it seemed to go against any kind of scientific logic that a channel used to shrink cells could also swell them.”

Using electrophysiological and fluorescence microscopy techniques in living cells to ascertain intracellular chloride levels, the researchers have demonstrated the involvement of the LRRC8A chloride channel in responses to high-salt stimuli.

A major technical and conceptual challenge

Studying this process at the molecular level has posed a considerable challenge for the team involved in this project. Because it is very complicated to conduct in vivo studies of cells while they undergo osmotic shock and shrink.  “Imagine you’re looking at a juicy grape, and suddenly it looks like a raisin, that makes things very complicated for us,” say the authors.

Another high-impact factor is that, under these stress conditions, the mechanism for activating the chloride channel is very different to what has been described so far in the literature. The article’s lead co-author, Predrag Stojakovic, says, “It came as a big surprise to find out that the signalling pathways in response to stress, the MAP kinase, proteins we’ve been studying in the lab for months, are directly responsible for activating this channel”. MAP kinases are a group of signalling proteins that add phosphate groups to other proteins, thus activating or deactivating them. Using molecular techniques, the authors have looked throughout the channel’s protein to find the target sequence of these kinase proteins. “We have been able to identify the specific residue of the chloride channel that leads to activation under the control of the MAP kinase channel in response to stress,” says doctoral student Stojakovic.

“This new piece of research opens up new possibilities for studying cell adaptation and survival  salt stress. Certain organs of the body, such as the kidneys, are often exposed to high salt concentration, which can threaten their survival. Knowing what molecules control survival under these conditions could be very useful for understanding certain pathologies that entail volume recovery in response to salts,” explains Dr. Posas.

In addition, discovering the role of this channel in these cell regulation processes is highly relevant in many pathologies involving proteins regulated by LRRC8A. This may be significant in situations such as certain kinds of arterial hypertension or cerebral ischemia.