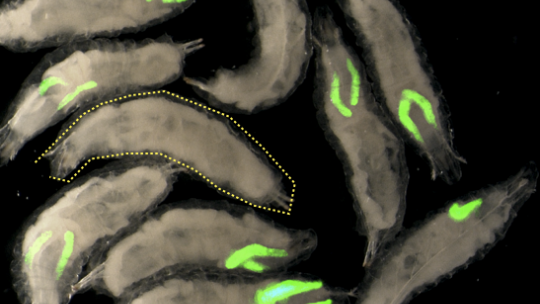 The lack of green signal in the Drosophila larva outlined in yellow indicates that it carries a mutation in a gene that is essential for EWS-FLI to trigger one of the oncogenic pathways that are essential for Ewing sarcoma growth.
Image 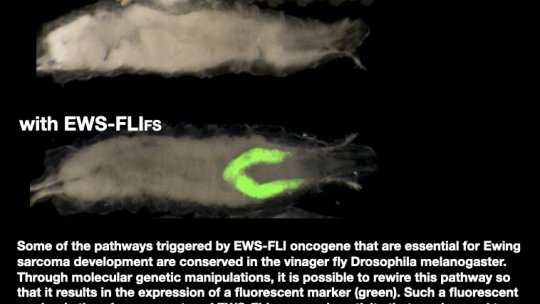 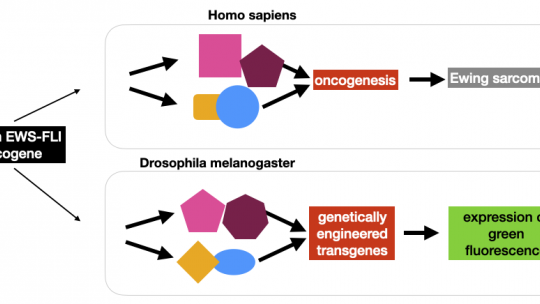 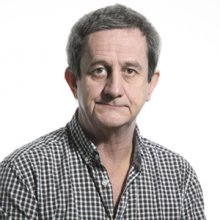 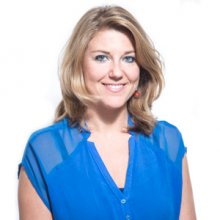 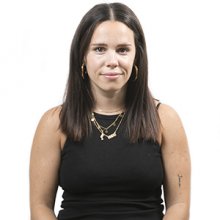 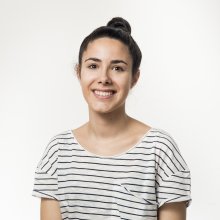 Ewing sarcoma is the second most frequent bone tumour in children, adolescents, and young adults. There is no specific treatment for this disease and current management is still limited to surgery, radiotherapy, and chemotherapy. The long-term survival of patients with metastatic or relapsed Ewing sarcoma is very low.

Ewing sarcoma is caused by a single oncogene that results from the fusion of two genes. Although a variety of genes may be involved, EWSR1 and FLI1 and the resulting cancer-driving oncogene, known as EWS-FLI, are found to be responsible in the majority of patients. Unlike most other types of cancer, all attempts to develop experimental animal models of Ewing sarcoma in mice (expressing the EWS-FLI oncogene) have failed.

Prompted by the need for a genetically tractable model that could be used to study the disease, researchers led by Dr. Cayetano González, ICREA research professor at IRB Barcelona, and Dr. Jaume Mora, scientific director at the SJD Pediatric Cancer Center Barcelona (PCCB), have engineered Drosophila transgenic strains that express a mutant variant of the human oncogene called EWS-FLIFS. Remarkably, they have found that expression of the human EWS-FLIFS protein in certain types of Drosophila cells triggers the same oncogenic pathways known to account for EWS-FLI oncogenic activity in human patients.

Graphical abstract. In human cells, the EWS-FLI oncogene triggers pathways that involve the activity of different genes and proteins (coloured shapes) that elicit an oncogenic response leading to the growth of Ewing sarcomas. In Drosophila cells, the human EWS-FLI oncogene triggers similar pathways that involve the corresponding fly orthologs of the human genes and proteins. In the newly developed fly model the oncogenic response has been rewired to elicit the expression of green fluorescence.

Building upon their new transgenic Drosophila line, the authors have rewired two oncogenic pathways used by EWS-FLI, such that when triggered by the presence of EWS-FLIFS, they result in the expression of a fluorescent protein that would otherwise never be expressed. Thus, rather than tumour growth, the researchers use fluorescence as a read-out of EWS-FLI oncogenic activity.

“This simple genetic trick greatly facilitates the implementation of massive genetic and chemical screens to identify "modifiers" that inhibit EWS-FLI's oncogenic activity as inhibitors of the appearance of fluorescence,” explains Dr. Cristina Molnar, a postdoctoral researcher at IRB Barcelona and first author of the study.

Genetic screens based on this new model will make it possible to discover critical proteins required for EWS-FLI to exert its oncogenic function, hence expanding our knowledge of the molecular basis of the disease, as well as identifying new putative therapeutic targets.  Chemical screens may identify compounds that could serve as lead molecules for the development of therapeutic drugs.

A solid collaboration between IRB Barcelona and PCCB

The laboratories led by Dr. González and Dr. Mora have been working together since 2019 to explore the use of Drosophila as a model for pediatric cancer.
Ongoing lines in this collaboration include genetic and chemical screens based on the Ewing sarcoma model and the development of new Drosophila models for other types of pediatric cancer.