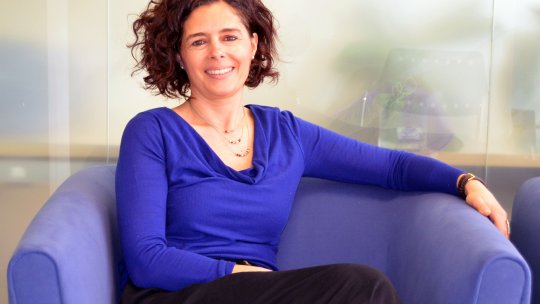 Sònia Saborit is IRB Barcelona’s Section Head of Pre-Award Grants and a member of its Equality and Diversity Committee. On the occasion of International Women's Day (8 March), this article puts her in the spotlight, in particular her commitment to gender and equality issues.

Sonia graduated in Philosophy from the University of Barcelona (UB) in 1997. She was always interested in asking questions and in exploring different perspectives of a given topic and admits that although she does not earn a living from being a philosopher, she likes to think that she applies the skills she learnt in the faculty. “I learnt how to think there, I developed critical thinking, how to organise my ideas, and set out arguments”.

“When you start reading about gender and feminism, you question your own identity, you ask yourself whether what you have done until now is what you really wanted or whether it is what was expected of you.”

She is a natural academic and she has pursued knowledge virtually continuously. In this regard, in addition to her degree, she has postgraduate studies in Philosophy and Business from the UB, an MBA from EAE-UPC and a Master’s in Gender Studies from the UB. Indeed, this master’s is her most recent achievement (July 2019). Working around her work and family commitments, Sònia has channelled her passion into this course over the last 4 years. “Several years ago, I started to get interested in topics related to gender and how being a woman places you in a specific place in the world. What are the things you choose and what are the things imposed on you by culture, society, environment, etc.”

Sònia is interested in the structural barriers that provoke that, despite all the efforts made, the situation of women in the Academia is still in disadvantage compared with their male counterparts. Examples of this disadvantage are the glass ceiling and the pay gap, among others, and the lack of women in some STEM (Science, Technology, Engineering, and Mathematics) disciplines. Actually, the final project for her master’s was focused on one of these barriers: the poor access of women to networks. “Gender studies have reported that when you belong to networks, above all informal ones, they have a positive effect on your career development. People who enjoy professional success were found to be members of many strong networks. Studies on organizational behaviour shows that informal networks are the most influential and that informal settings (e.g. before and after the meetings, over a drink before a congress…) are precisely those in which many important decisions are made. At the same time, informal networks are the ones that are the least transparent, difficult to track, and the rules governing them are less clear. The interesting part of the topic from a gender perspective is that, as gender studies show, networks are predominantly masculine and the access of women (and minorities) to them is poor compared with men. In this regard, one of the key factors to balance the situation is gender awareness and network awareness. In her project, she interviewed 7 scientists at IRB Barcelona, and although small, it is the first to address the impact of these networks in the fields of biomedical research and in the Spanish context.

“Awareness is something that should be worked at all ages and at all levels of society...in the work environment, in the academic setting, in the media…”, she says. In this regard, IRB Barcelona’s Equality and Diversity Committee devotes considerable efforts to this issue. “We are setting up training initiatives and raising awareness of discriminations and inequalities in all of its forms (not only based on gender but also on race, sexual orientation, gender identity, religion, etc). This is the first step. The point is that if someone doesn’t show you the existence of these kind of discriminations, you just don’t see them. We need to get used to seeing the world through purple glasses”.

So when do gender stereotypes emerge? Very early, and the playground is an example. For instance, most kids that play football are still boys, which, in a subtle way, can discourage girls from playing (we tend to join activities involving people we can identify with). In the same way, little boys quickly learn, for example, that they shouldn't wear “girly” costumes.  We learn what is “acceptable” or “normal” for our gender at a very young age, and this normativity is especially strict with boys. It is easier for a girl to dress as a firefighter than a boy to dress as a princess: society especially chastises the behaviour of boys that is considered effeminate or “not masculine enough”. In this regard, Sonia quotes the American feminist Gloria Steinem: “We've begun to raise daughters more like sons... but few have the courage to raise our sons more like our daughters.” This statement certainly gives food for thought.

“You asked me earlier what philosophy has to do with gender studies. When you start reading about gender and feminism, you question your own identity, you ask yourself whether what you have done until now is what you really wanted or whether it is what was expected of you,” she says with intensity, her eyes shining.

Perhaps International Women's Day would be an ideal occasion for us all to put on a philosopher’s hat and ask a few questions. The answers may surprise us!