Who’s the scientist behind the new Comparative Genomics group? 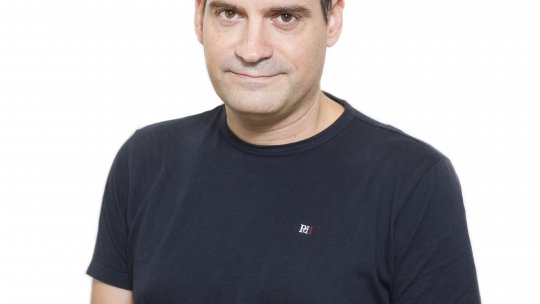 “Society is interested in research and I would encourage other scientists to get involved in public outreach activities, it’s good for motivation!”

It’s time to find out a little more about Toni Gabaldón, who has just moved from the Centre for Genomic Regulation (CRG) to join the Institute for Research in Biomedicine (IRB Barcelona)’s team of researchers. Perhaps the first challenge to overcome is finding his office space, which is tucked in next to that of Patrick Aloy. His office is uncluttered, reflecting that he spends his time flitting between the other half of his group, which is located at the Barcelona Supercomputing Centre (BSC). Some of his team performs experimental work at IRB Barcelona, generating large amounts of data, while the other members up at the BSC exploit this centre’s computational infrastructure.

Toni Gabaldón is from Valencia, where he studied biology, specializing in biochemistry. At that time, the Human Genome Project was just starting and bioinformatics was very much in its infancy. He had no idea back then that one day he would be routinely sequencing genomes in his own lab. “15 years ago when I was doing my thesis I never imagined that it would be possible to sequence a human genome for 500 or 1000 euros,” he comments.

The Comparative Genomics group led by Toni Gabaldón is devoted to studying how genomes develop, the rules that govern how they alter over time, and how these alterations affect the phenotype or traits. “If you look at all the species that can infect humans, there appears to be a lot, but in fact those with the capacity to infect us is an insignificant proportion if you consider the diversity of pathogens that we are exposed to on a daily basis. So why do some infect us and others don’t? What has happened in their genomes that confers this capacity? This is precisely what we study and we are currently working on Candida, a type of fungus,” he explains.

But a quick glance at the articles that he has published reveals the scope of his work, and it has certainly not been limited to humans. “At the end of the day a genome is a genome,” says Toni smiling, “once we have the sequence in the computer, we apply our approach. There is a universal genetic code and the laws of genomic evolution are shared by a crocodile and a fungus.” The hot topic addressed by Toni’s team is the microbiome—the community of microorganisms that lives in us, which has emerged as a key player in health and disease in recent years. Toni is confident that his expertise can lead to synergies with many of the groups at the institute, and expects to bring to IRB Barcelona “A vision of genomic medicine from the perspective of microorganisms.”

So what about Toni the person rather than the scientist? Well, he has a strong interest in communication. “My first experience of an interview with the press was not great. They published something completely different to what I told them and the title of the article did not reflect what I said,” he explains. “Society is interested in research and I would encourage other scientists to get involved in public outreach activities, it’s good for motivation,” he concludes. He has some experience as an amateur theatre actor: “If I hadn’t been a scientist, I think I would have liked to be a theatre actor. When I was in that theatre group it helped me to disconnect, to stop thinking about things and to concentrate on my expression. I miss it,” he confesses. It sounds like Toni might be an ideal ambassador for our outreach initiatives!

Let’s hope that his busy life commuting between two centres allows him to participate in some of IRB Barcelona’s communications activities and that everyone gets the opportunity to learn about his fascinating projects. Welcome to IRB Barcelona, Toni Gabaldón!