On Saturday 9 April, Mollerussa will host the 6th “Vi per Vida” (Wine for Life) wine-tasting event, which is being organised by the charity organisation “Vi per Vida” for 300 people.

The charity organisation has already received the support of five public entities, 22 wineries, 14 companies, and 31 celebrities from the world of arts and sport and the restaurant sector.

On 9 April at 18:00, Mollerussa is to host the 6th “Vi per Vida” Wine-Tasting Event, organised by the charity organisation Vi per Vida, which is promoted by the leading sommelier Xavier Ayala. This third wine-taste in Mollerussa, in the province of Lleida, will be held in the Pavelló Pla de l’Urgell (Pav. Firal) de Mollerussa. The activities undertaken by “Vi per Vida” seek to make the general public aware of the value of research and to support the work on cancer and metastasis performed at the Institute for Research in Biomedicine (IRB Barcelona).

Xavier Ayala, who guides these wine-tasting gatherings, explains that for the 6th edition the organisation has chosen to downsize, opting for “fewer participants—around 300”, while he recalls that “the “Vi per Vida” charity strives to follow the roadmap set out from day 1: namely, in memory of my father, I have always wanted to contribute to research into metastasis”. 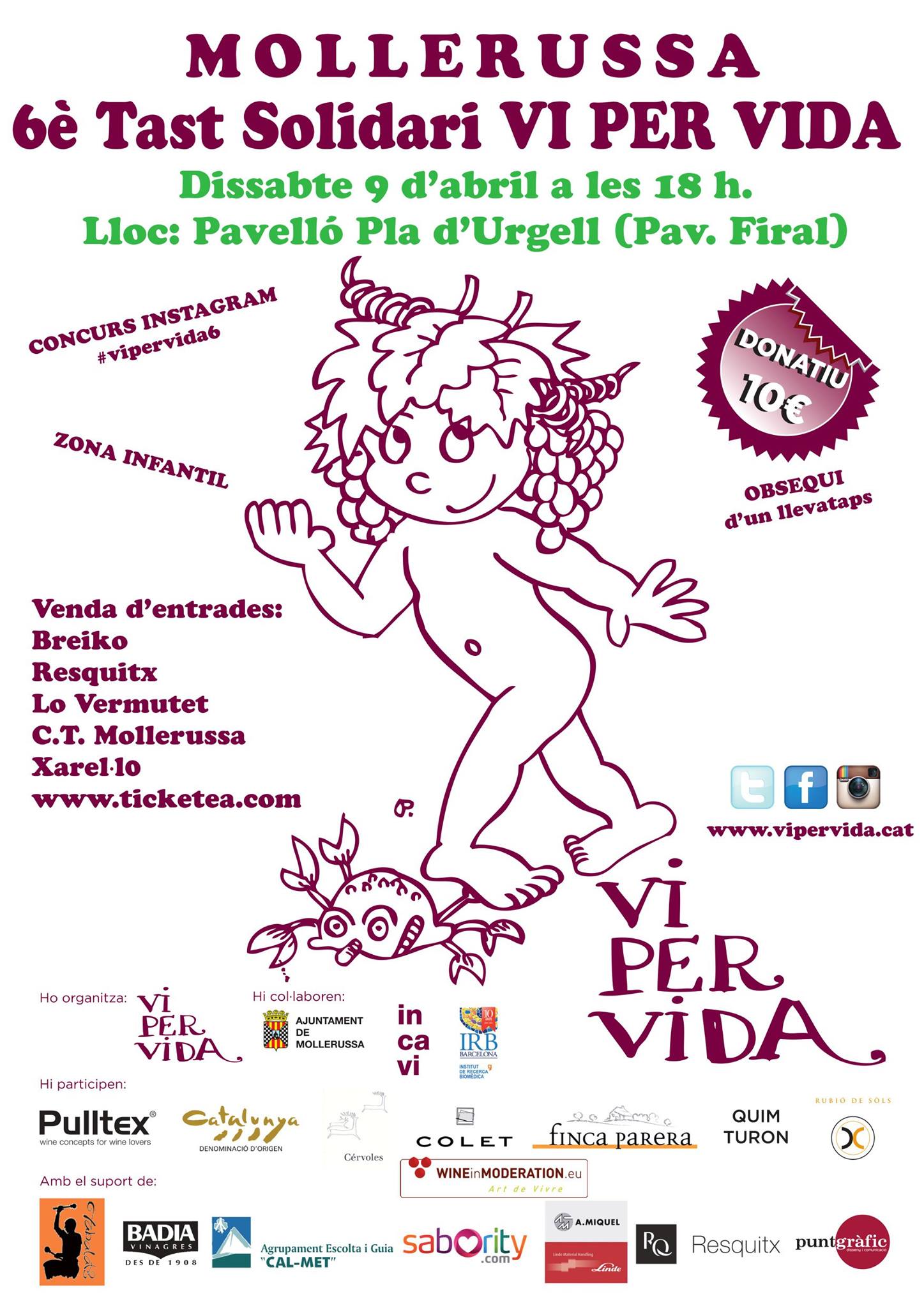 Since the launch of its first wine-tasting event in 2014, the Vi per Vida project has grown in followers and in organisations that support the initiative. Fourteen companies, 22 wineries from around Catalonia, and 5 public entities, namely the Town Councils of Mollerussa, Calella, and Vigralla del Penedès, the entity DO (Designation of Origin) Catalunya, and the Institut Català de la Vinya i el Vi” (INCAVI)—the latter run by the Government of Catalonia—have participated in these events. In addition, public figures from around Catalonia, such as Pilarín Bayés, David Carabén, Carme Ruscalleda, Quim Masferré, Joan Massagué, Bruno Oro and the Roca brothers, among many others, have also collaborated in this fund-raising project.

“It is a great pleasure to be supported by an organisation such as “Vi per Vida””, explains Joan J. Guinovart, director of IRB Barcelona. “We admire the huge efforts made by all those involved and are most grateful that the event that started two years ago continues today. Xavier Ayala and his family are an example of commitment, tenacity and enthusiasm”.

The 6th event will serve five wines: two belonging to DO Costers del Segre (Cérvoles Celler Negre and Xarel·15), two to DO Penedès (Finca Parera Ecològic and Clàssic Penedès) and one to DO Catalunya (Segura Viudas). The tickets cost 10 euros and participants will be given a Pulltex corkscrew.

A new feature of the next gathering is an area devoted to children and supervised by carers. Also, there will be a charity paddle tennis tournament, a dinner in the La Boscana restaurant the day before the wine-tasting event, and an Instagram competition.

Tickets for the wine-tasting event can be purchased online through Ticketea or at the following local sales points: Breiko, Lo Vermutet, Club Tennis Mollerussa, Resquitx and Xarel·lo.

More information about the Vi per Vida project

To mark World Cancer Day, the programme El Matí de Barcelona Betevé broadcasted by Radio Barcelona has interviewed Roger Gomis, ICREA Researcher and head of the Growth Control and Metastasis Lab at IRB Barcelona. During the interview, he talked about metastasis, the process by which a tumour spreads to the rest of the body, allowing cancer cells to adapt to new environments “What we are focusing on in our lab is precisely how this cell adaptation and plasticity comes about,” says Gomis.

How to prevent colorectal cancer from metastasizing?

The “Preguntas Big Van” section of the newspaper La Vanguardia interviewed Eduard Batlle, ICREA researcher and head of the Colorectal Cancer Lab at IRB Barcelona, about his collaboration with the Centro de Análisis Genómico regarding the study of colorectal tumour samples using the new unicellular analysis method. “This technique allows us to see what is happening inside the tumour at a level of detail that was unimaginable 5 years ago,” says Batlle.