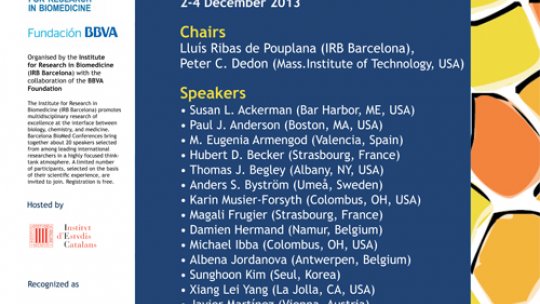 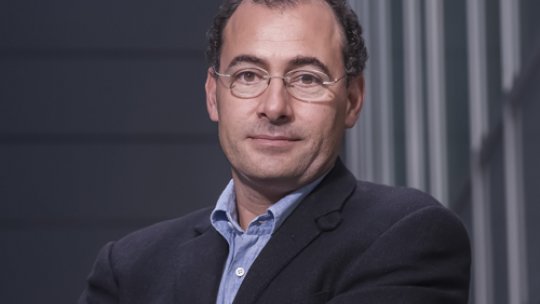 Poster of the Conference

From Monday 2 till Wednesday 4 December, the “Institut d’Estudis Catalans” will be hosting the conference “Gene translation: fidelity and quality control”, organized by IRB Barcelona and the BBVA Foundation.

Over three days, from 2 to 4 December, leading experts in the cell process par excellence, namely, protein translation, and specialists in associated diseases will come together at the IEC on the occasion of an event held by the Institute for Research in Biomedicine (IRB Barcelona) and the BBVA Foundation. Lluís Ribas de Pouplana, ICREA researcher at IRB Barcelona, and Peter Dedon, from the Massachusetts Institute of Technology (MIT, USA), are the chairs of the 23rd Barcelona Biomed Conference,  “Gene translation: fidelity and quality control”.

Molecular biology, the most important scientific revolution of the 20th century, focuses on the most vital cell process, namely protein synthesis. It is the process through which genetic material is used by the cell to produce proteins, the molecules responsible for almost all cellular functions. “Because protein synthesis is such a key process, the list of physiological disorders caused by errors during translation and control is enormous,” explains Ribas de Pouplana, head of the Gene Translation Laboratory.

In this Barcelona Biomed Conference, Drs. Ribas and Dedon have brought together researchers from labs that have been working in gene translation for more than forty years and scientists working in distant biomedical topics who have found a link between their fields and translation. “This is a very commixed conference because, surprisingly, this dialogue is not common. The success of the conference, the International profiles of the participants that we have attracted and the presence of Eric Westhof, chief editor of the top journal in this field, Nucleic Acids Research, reflects that the organisation of this conference was spot on,” says Ribas.

Paul Schimmel and Paul Anderson, two authorities in each field

One of the international references in protein translation analysis is Paul Schimmel, from the Scripps Research Institute in California (USA), who served for many years as senior professor at the MIT and mentored Ribas de Pouplana before his recruitment to IRB Barcelona. “He has been the world leader in translation research for 40 years, but he is also one of the most outstanding bioentrepreneurs in the United States,” explains Ribas. Schimmel, aged 73, has founded a dozen companies that currently employ thousands of people in the States and in China, and he was recognized in 2007 as the bioentrepreneur of the year in the United States.

The biomedical researchers participating in this event include, for example, Paul Anderson, a physician in inflammatory diseases at the Brigham and Women's Hospital in Boston and “K. Frank Austen Professor” at the Harvard Medical School. “Anderson is one of the examples of the enormous connection between components of translation and biomedical problems,” explains the IRB Barcelona researcher. Anderson has discovered that the diseases they are studying are ultimately regulated by a process controlled by tRNAs, the key molecules in protein synthesis. “We want to promote dialogue between Schimmels and Andersons, this is the spirit of the conference,” sums up Ribas.

The guest speakers representing the field of biomedicine include Susan Ackerman, from the Jackson Laboratories, in the United States, who addresses neurodegeneration in mouse models. Ackerman found that the cause of the defect was in protein translation. Albena Jordanova, from VIB Life Sciences Research Institute, in Flanders, Belgium, works on Charcotte-Marie-Tooth (CMT), a neurodegenerative disease that causes muscular atrophy and loss of mobility. Some kinds of CMT are also produced by mutations in tRNA synthetases, the molecules on which Ribas’ research focuses.

Finally, one of the speakers is Johnatan W. Yewdell, virologist from the National Institute of Allergy and Infectious Disease, in Bethesda, US. Yewdell’s research addresses how a cell responds when infected by a virus and how the virus sequesters the translation machinery of the cell; however, he has ended up studying ribosomes, the key translation machinery.

Programme and guest speakers at the conference “Gene Translation: Fidelity and Quality Control”.