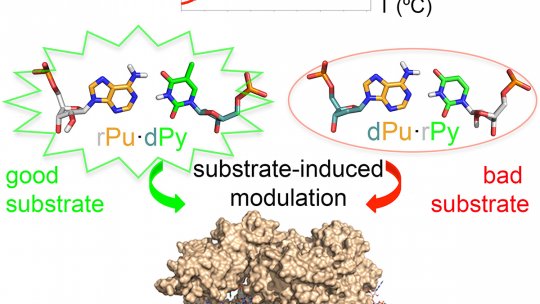 Modesto Orozco’s laboratory (IRB Barcelona) has published a study on the source of asymmetry between nucleic acid hybrid (RNA and DNA) in CHEM (Cell Press).

The results are a promising step towards enhancing gene therapies, which are applicable to many diseases.

A study headed by the Institute for Research in Biomedicine (IRB Barcelona) and published in the journal CHEM furthers our understanding of the asymmetry between nucleic acid hybrids. This advance may make a significant contribution to improving gene therapies.

Done in collaboration with the Centre for Genomic Regulation (CRG) and the Institute for Advanced Chemistry of Catalonia (IQAC, CSIC), the study has analysed the source and biological consequences of the asymmetry that occurs in RNA·DNA hybrids when the relation between purine (adenine and guanine) and pyrimidine (thymine and cytosine or uracil) bases differs in RNA and DNA strands.

The results of the study indicate that, in contrast to the homoduplexes of DNA or RNA, RNA·DNA hybrids show intrinsic asymmetry, which suggests that this property is important for biological function and for biotechnological applications. When the DNA of the hybrids is rich in pyrimidine bases, the duplex is more stable and rigid than when the DNA chain is rich in purine bases.

This symmetry may lead to improvements in the efficiency of therapies based on hybrids, such as antisense therapy, which can, for instance, control the regulation of genes that contribute to the progression of cancer progression, among other diseases, and CRISPR-Cas9 gene editing technology, which allows a target gene to be cut and edited.

Modesto Orozco, head of the Molecular Modelling and Bioinformatics Laboratory at IRB Barcelona and senior professor at the University of Barcelona, says, “Thanks to a combination of theoretical and experimental methods, we have been able to understand the relationship between the sequence and stability of DNA-RNA hybrids— structures that form in the cell spontaneously and that have enormous therapeutic potential. Our results will allow further development of much more efficient methods to block and edit genes and that can potentially become therapeutic alternatives for diseases for which there are no effective treatments”.

The study was supported by funding from the Ministry of Science, Innovation and Universities (previously called MINECO) and the European Research Council (ERC).