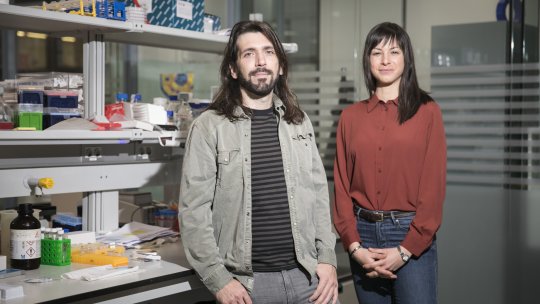 The European Research Council (ERC) has awarded Starting Grants to Dr. Cristina Mayor-Ruiz and Dr. Alejo Rodríguez-Fraticelli to support their research for 5 years.

The two projects focus on the development of protein-degrading drugs and exploration of the epigenetic memory of stem cells, respectively.

Today, the European Research Council (ERC) has announced the award of its Starting Grants  to 397 group leaders throughout Europe, 23 of them in Spain—of these 13 in Catalonia. Dr. Alejo Rodríguez-Fraticelli and Dr. Cristina Mayor-Ruiz, recently appointed by IRB Barcelona to set up their own groups, are among the beneficiaries.

The president of the ERC, Dr. Maria Leptin, stresses that “Allowing young talent to prosper in Europe and pursue their most innovative ideas is the best investment in our future, above all in a context of ever-growing global competition. We must trust young people and their understanding of the fields that will be important tomorrow”.

“It’s a real honour to receive this funding. This is an incredible boost for a laboratory that is just starting up because it provides the necessary stability to be able to focus on cutting-edge science,” says Dr. Mayor-Ruiz.

“Getting this support when you are starting your career as an independent researcher allows you to embark on large-scale projects and to direct your research towards making an impact that will go down in the history of science,” adds Dr. Rodríguez-Fraticelli.

Monovalent degraders: drugs for the destruction of proteins of therapeutic interest

Headed by Dr. Cristina Mayor-Ruiz in the Targeted Protein Degradation and Drug Discovery lab, the TrickE3 project will focus on the development and systematic discovery of a novel type of drug, namely  “monovalent degraders”. These drugs comprise a single piece but they have a double mechanism of action: they can bind to a protein of therapeutic interest and, in turn, recruit the natural cellular degradation machinery (E3 ligases) to remove it. This technique makes it possible to eliminate proteins that were previously considered inaccessible and thus provides new perspectives for the treatment of a wide range of diseases. Monovalent degraders also have highly desirable physicochemical properties, which will help them reach clinical practice.

Despite the enormous potential of these types of drugs, the few that are available have been discovered by chance, without following a rational strategy. The TrickE3 project has the ambitious goal of changing this paradigm and systematizing both the design of and search for these drugs. Although applicable to many diseases, the project will focus on useful degraders for pancreatic cancer. “We hope that the methods we want to implement help to turn protein degradation into a therapeutic strategy. Pancreatic cancer is one of the cancers with worse prognosis and this is why it is a priority focus for us,” says Dr. Mayor-Ruiz.

Stem cell diversity and its implications in different diseases

Through the MemOriStem project, the Quantitative Stem Cell Dynamics lab, headed by Dr. Alejo Rodríguez-Fraticelli, will address the complexity of stem cell diversity. Specifically, it will attempt to answer two key questions: how does stem cell diversity arise and what implications does this diversity have on inflammatory diseases, cancer, and processes such as ageing?

The MemOriStem project will focus on the study of hematopoiesis, the process that gives rise to the formation of blood cells, including immune system cells, that are associated with many diseases. Previous studies by the researcher point to the establishment of various epigenetic memories that last over time and that determine the characteristics of the stem cells themselves, as well as those of the cells derived from them.

“Understanding how stem cell diversity arises and its consequences will allow us to decipher how we might manipulate this diversity for therapeutic purposes. It will also bring about an important step forward in the field of synthetic cell biology, with implications for both the prevention and treatment of diseases,” says Dr. Rodríguez-Fraticelli.