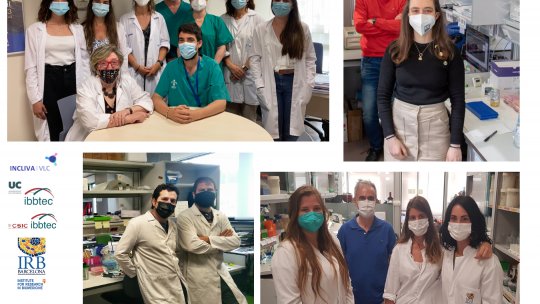 The four research groups collaborating in the project.
Image 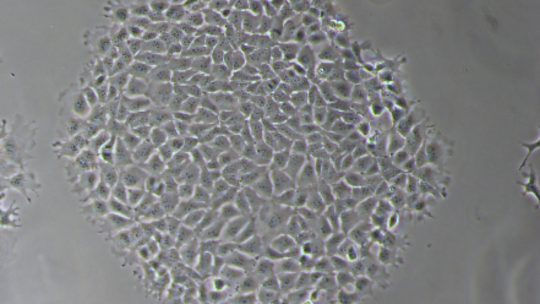 The Spanish Association Against Cancer awards €1.2M to a 5-year research project.
Resistance to treatment is very common in triple-negative breast cancer, making it a highly aggressive tumour.
IRB Barcelona is leading a project that will be done in collaboration with the Instituto de Investigación Sanitaria INCLIVA in Valencia, the University of Cantabria and the Institute of Biomedicine and Biotechnology of Cantabria (IBBTEC) in Santander.

Breast cancer is the second type of cancer with the highest mortality in women and around 30,000 cases are diagnosed in Spain every year. The most aggressive type, which accounts for approximately 15% of cases, is known as triple-negative. It was given this name because it does not have any of the therapeutic targets that are present in other tumours so it is treated with general chemotherapy, usually taxanes, anthracyclines and carboplatin. However, a high percentage of patients do not respond to treatment and end up developing resistance and metastasis, the latter being the main cause of death.

Dr. Ángel R. Nebreda, head of the Signalling and Cell Cycle laboratory at IRB Barcelona, is leading a Coordinated Project of the Spanish Association Against Cancer to find features that can predict patient response to chemotherapy, to study the mechanisms underlying resistance, and to identify potential targets to enhance the effectiveness of current drugs and, in short, to define new therapeutic strategies.

The project will be developed in collaboration with Dr. Juan Miguel Cejalvo (Instituto de Investigación Sanitaria INCLIVA in Valencia), Dr. Ignacio Varela (University of Cantabria) and Dr. Fernando Calvo (Institute of Biomedicine and Biotechnology of Cantabria, IBBTEC). It will last five years and is expected to involve the active participation of more than 20 researchers.

“Triple-negative breast cancer has the worst prognosis of all types of breast tumours. Previous work in the laboratory has allowed us to identify some mechanisms related to the development of resistance to general chemotherapy, and this is what we are going to focus on in this project,” says Dr. Nebreda.

The goal of improving chemotherapy treatment for triple-negative breast cancer will be tackled through two complementary lines of study. On the one hand, transcriptomic analyses will be conducted on human tumours, and on the other, factors that enhance chemotherapy will be identified. Finally, all the information will be pooled to identify mechanisms that regulate the response to chemotherapy, which will be exploited as potential markers or will be modulated to improve the treatment of patients.

In this line of the project, work will focus on tumour samples from triple-negative breast cancer patients before and after treatment. The aim is to compare those that are sensitive to chemotherapy (tumours that have shrunk significantly after treatment) with those that present resistance to treatment. On the one hand, techniques will be used to identify the distinct cell populations present in the tumours and, on the other, organoids (mini-tumours) will be developed to reproduce the effect of the chemotherapy treatments in the laboratory.

“The goal is to determine whether there are differences in tumour cells, but also in stromal cells, which coexist with the cancer cells in the tumour,” Dr. Nebreda explains. “If we identify the characteristics of cells that are present only in treatment-resistant tumours, or the opposite, we will have a very important insight to understand resistance,” he adds.

Study line 2: on the search for factors of resistance to treatment

The second line of the project will focus on the search for cell factors that confer resistance to chemotherapy. The project will centre on the systematic study of the roles of 500 proteins called kinases. These proteins regulate key cellular processes, such as proliferation, differentiation, cell death and metabolism, and, in many cases, it is possible to block their effects pharmacologically, thereby making the results potentially applicable in the clinic.

Gene editing techniques will be used to block the distinct kinases separately, thus allowing the study of how each one affects resistance to treatment. Several triple-negative breast cancer cell lines will be used for this purpose.

“If we observe that chemotherapy is more effective upon blocking a given kinase in several models, that is to say, it kills more cancer cells, this will be the first promising result and we will further investigate it,” says Dr. Begoña Cánovas, research associate in the same laboratory.

The researchers of the four participating centres will share the results obtained in the two study lines to identify correlations between the analyses using cellular models and tumour samples from patients. “At the end of the five years, we hope to better understand how these types of tumours respond to chemotherapy and to have identified therapeutic targets that lead to an improvement in the treatment of triple-negative breast cancer,” conclude Dr. Cánovas and Dr. Nebreda.

The funding awarded to this project by the Spanish Association Against Cancer is part of a collaboration agreement with Iberdrola, whose funds allocated to the Association in the next two years will be used for this research project.