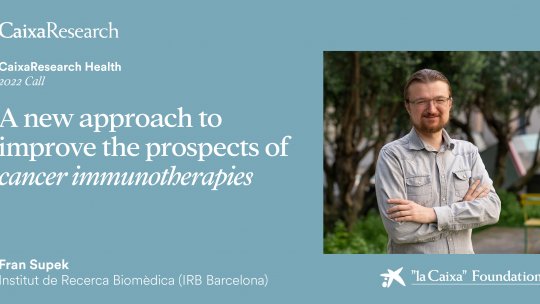 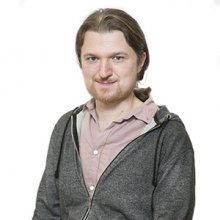 The 2022 CaixaResearch call for Research in Health has awarded funding to 33 promising new biomedical and health projects undertaken in research centres and universities in Spain and Portugal. This support once again reflects the commitment of ”la Caixa” Foundation to projects of excellence that can have a positive impact on public health.

To this end, this organisation has awarded a total of €23.1M to 20 Spanish and 13 Portuguese projects, which will be developed over the next three years.

One of the selected projects, led by Dr. Fran Supek, ICREA researcher and head of the Genome Data Science lab at IRB Barcelona, aims to use machine learning to find new therapeutic strategies to improve the efficacy of immunotherapy for the treatment of cancer. The project will be carried out in collaboration with Dr. Ana Janic at the Universitat Pompeu Fabra (UPF).

Another of the projects, which involves IRB Barcelona's Biomedical Genomics lab, directed by ICREA researcher Dr. Núria López-Bigas, will be coordinated by Dr. José Javier Fuster at the Centro Nacional de Investigaciones Cardiovasculares Carlos III (CNIC) The project will focus on the search for new biomarkers for the progression of heart failure.

The following topics, among others, are addressed by the awarded projects: a new treatment for autoimmune encephalitis; analysis of how the intestinal microbiota influences the loss of control over food intake in obesity; how tumour cells modulate the microenvironment to create a favourable one for them; and the development of a new therapeutic nanotechnology to stop the progression of Parkinson's disease or to regenerate heart tissue after a heart attack.

A new approach to improve the prospects of cancer immunotherapies

Although immunotherapy has revolutionised cancer treatment, only around twenty per cent of patients currently benefit from it. Moreover, identifying these patient before treatment begins continues to be a major challenge.

One possible indication is the number of mutations, which predicts whether a tumour is treatable by immunotherapy. This suggests that the mutated proteins can be detected by the immune system. It is also known that human cells have a mechanism by which they can silence the expression of mutated proteins.

In this project, the researchers’ hypothesis is that that switching off this mechanism in cancer cells would de-silence many mutations, causing more mutated proteins to be produced and rendering the tumour visible to the immune system and treatable by immunotherapy.

They will test this hypothesis using animal models of lung cancer and lymphoma. Their aim is to pave the way for future studies investigating the administration of drugs that inhibit this mechanism with a view to improving the prospects of immunotherapy.

Identifying new biomarkers for the progression of heart failure

Until recently, the acquisition of mutations in blood-forming stem cells was thought to be relevant only to cancer. However, there is growing evidence that it is also a hallmark of ageing. Indeed, several human studies have shown that people carrying certain mutations in blood cells – a condition called clonal haematopoiesis – have high mortality rates, mainly due to cardiovascular disease.

Scientists have observed a potential connection between these mutations and the development of heart failure, a disease which develops when the heart does not pump enough blood for the body’s needs.

MyoClonal is a collaborative project which will combine studies in humans and mice to further our understanding of the relevance of clonal haematopoiesis in cardiovascular disease. The researchers will conduct an in-depth study into the effect on heart failure of different acquired mutations in blood cells. The knowledge they generate will be used to improve the management of heart failure patients, who often require frequent hospitalisations and are at high risk of death.