A warm-hearted tribute to honour the career of Dr. Ernest Giralt 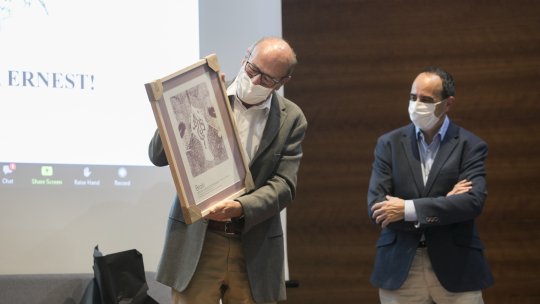 On Friday 22 October, the Antoni Caparrós Auditorium at the PCB hosted a tribute event to mark Dr. Ernest Giralt’s outstanding career dedicated to chemistry. Dr. Giralt was one of the founding members of the IRB Barcelona and he headed the former Peptides and Proteins Laboratory for many years until his retirement in October 2020. A much-loved member of the Institute’s community, he was accompanied by over 100 well-wishers, including scientific collaborators, former students, family members, and other colleagues plus many people who followed the event through video streaming.

The gathering kicked off with a few words from Dr. Francesc Posas, the director of IRB Barcelona. “This is an important event for the Institute because it goes beyond talking about science, and we will talk about people. At the end of the day, it is people that make an organisation,” he said. He thanked Dr. Giralt for 15 years’ service, welcomed him in his new role as Emeritus Professor of the Institute and acknowledged his satisfaction at being able to address such a large audience after so many months of restrictions.

Next up was Dr. Xavier Salvatella, master of ceremonies, who thanked IRB Barcelona for tasking him with the organisation of the event and explained how the tribute would throw light on the multitalented nature of Dr. Giralt. 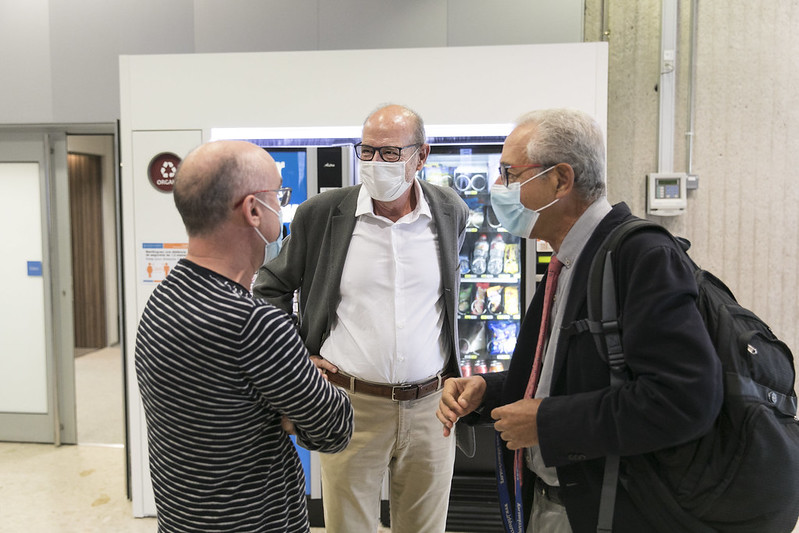 Dr. Joan Guinovart, Emeritus professor and former direct of IRB Barcelona, thanked Dr. Giralt for his key role as a founding member of the Institute and remarked on his extraordinary vision of chemistry and biology as far back as the 1990s. “He has gone beyond the traditional sphere of chemistry and built a bridge between chemistry and biology, giving an extraordinary dimension to his work,” he said, referring to his “friend and much-admired colleague”. He extolled his research into peptides and the use of NMR to solve their structures, his innovative capacity to “generate new ideas and concepts”, his contributions to the management aspects of the Institute, his work as a mentor of so many exceptional chemists over the years, and his enthusiastic support of a multitude of activities, in particular the Arts and Science committee and in a range of other outreach activities. Dr. Guinovart shed light on another dimension of Dr. Giralt, his passion for music and his extraordinary talent as a singer, pianist, descant recorder player and composer, the latter exemplified by the work 2018 entitled chemical elements, in which, like an alchemist, he transformed elements of the periodical table into musical notes.

Dr. David Andreu, group leader at the Pompeu Fabra University and former colleague, drew attention to Dr. Giralt’s focus on the chemistry-biology tandem and his pioneering work with solid-phase peptide synthesis (a technique developed by Dr. Bruce Merrifield that later won him a Nobel Prize in Chemistry). He also remarked on the honoree’s pivotal role in making Barcelona a school of peptides. With respect to “structural vision”, Dr. Giralt was a firm believer in the use of NMR-based methods and strategies for drug discovery and drug delivery and, in this regard, he used peptide chemistry and structural biology to do relevant research.

The next speaker was Dr. Judith Villen, group leader at the University of Washington. In spite of the time difference (it was 3 am in Seattle!), she wanted to thank Dr. Giralt for his mentorship while doing her PhD at the University of Barcelona. She praised his capacity to simplify ideas and praised his creativity, contagious passion, and transmission of excellence and innovation. She went on to describe him as a visionary leader and a driver behind putting Barcelona on the map.

The next to speak was Dr. Fernando Albericio, group leader at the Kwa-Zulu-Natal University in South Africa, who commented that, beyond the metrics, papers, and impact factors, Dr. Giralt embodied a myriad of intangible elements, including internationalization and scientific independence. He talked about the three poles associated with peptide science, namely Brisbane, Australia, Montpellier, France and Barcelona, attributing the position of Barcelona to Dr. Giralt’s determination and endeavours. On a more personal note, he thanked his colleague for his support and friendship over 47 years.

Dr. Meritxell Teixido, CEO and CSO of the spin-off Gate2Brain, described her experience working with Dr. Giralt with warmth. She recalled the coloured pencils that were always on his desk and finding Dr. Giralt in his office whistling a tune and her leaving with a list of ideas, yet another sheet of paper covered in colours, and a “tank full of energy”.
Dr. Macarena Sánchez, group leader at the Institute of Parasitology and Biomedicine “López Neyra” and former PhD student, spoke about Dr. Giralt’s open-door policy and accessibility, his friendliness, generosity, transmission of enthusiasm, and his involvement in the day-today activities of the lab.

Next to speak was Dr. Teresa Tarrago, CEO of Exheus, former associate researcher in his lab for many years and cofounder of Iproteos with Dr. Giralt back in 2011, a spin-off from the University of Barcelona and IRB Barcelona that sought to apply new strategies to discover drugs with greater efficiency and fewer side effects. Special emphasis was given to his mentoring in tech transfer. “I don’t think I am exaggerating by saying that Ernest has one of the biggest percentages of people who have passed through his group, whether postdocs, collaborators, or PhD students, who have ended up founding their own companies or exercising entrepreneurship with new technologies.” She too recalled the importance of his coloured pencils and said, “He taught me to appreciate the beauty of the structure of peptides and proteins.”

The event ended with an emotive compilation of videos from former students and colleagues worldwide, in which they emphasised his team building skills, his human quality and his appreciation of the contributions of others, and they passed on their best wishes.

Dr. Posas returned to the lectern to present Dr. Giralt with print entitled "Brain" by the artist Jordi Salvany (showing a histological coronal section of the murine brain at the level of the corpus callosum and dentate gyrus of the hippocampus). After expressing his thanks, Dr. Giralt described the event as “like watching a film about my career” and explained that his life has always revolved around four central axes, namely Family, Music, Science and Friends.

“For me, the central axes of science and friends are almost the same. All of these faces around me, although our relationships have been professional, they haven’t been limited to that sphere. Fortunately, friends and science have always been tied together. In this new stage as an amateur scientist, I am taking your friendship with me,” he said warm-heartedly.
His words were much applauded by those present.

Over the years, Dr. Giralt has inspired the Institute’s community and been a solid reference for science of excellence. Although he retired in October 2020, Dr. Giralt will continue to grace IRB Barcelona with his contagious enthusiasm and amiable nature in his role as Emeritus Professor.