It is a three-year project that forms part of the “Escoles Tàndem” (Tandem Schools) Programme promoted by the Catalunya-La Pedrera Foundation.

It is the first tandem between a research centre and a primary school.

The school curriculum will be designed around biomedicine.

To use biomedicine to design the teaching programme of a primary school from first year to sixth year and across the full range of subjects. This is precisely the goal and challenge of a three-year project started in the academic year 2015-16 by the Institute for Research in Biomedicine (IRB Barcelona), in collaboration with the state school Mare de Déu de Montserrat, in Cornellà. This initiative forms part of the Escoles Tàndem Programme and receives counselling, follow-up and funding from the Catalunya-La Pedrera Foundation, with the support of the Department of Education of the Catalan Government.

Tandem Schools are innovative educational projects involving a partnership between a school and a centre of reference. In this regard, the two partners work together to design a school curriculum around a given theme and to boost academic results, the standing of the school, and social cohesion. This is the 9th Tandem Programme to be promoted by the Catalunya-La Pedrera Foundation since 2011, and the first to involve a research centre and a primary school.

“Adapting biomedicine to a school curriculum is a fantastic project that allows interactions between three very different organisations but which share a common goal, namely to improve teaching practice in general and sciences in particular,” explains Joan Guinovart, director of IRB Barcelona. “Being the first to undertake such a project is an additional challenge for all those involved,” says Sarah Sherwood, Head of Communications and External Relations. “A school and a research centre operate in totally different spheres and have different ways of going about things, which means that we will have to make a big effort to adapt to each other,” she explains.

Biomedicine as the core theme

Without overlooking the basic skills that students have to acquire, the curriculum of the school will be based upon the project “Discovering biomedicine together”, in such a way that pupils end up gaining in depth knowledge of the topic, while at the same time the general academic results of the school are improved.

The first steps have involved a series of meetings between IRB Barcelona, the Foundation and the school to decide how to implement the programme and the activities and workshops to be given each year and to each age group. In addition to children of the primary school age, the project will also address those in pre-school, which includes 3 to 5 year olds. “The teaching staff has been highly motivated from the very start and in our experience this is crucial for the success of the project,” says Lluís Farrés, head of the Àrea de Coneixement of the Catalunya-La Pedrera Foundation.

The activities undertaken during the first two terms were focused on teacher training. IRB Barcelona instructed them about the scientific method and in specific concepts of the subjects that will be covered. Furthermore, the teaching programme was discussed with the aim to transfer the knowledge acquired to the classroom.

The activity programme for the students has been drawn up taking into account the school’s agenda, such as visits to museums or the care of an allotment. The activities will be used to teach the children about diseases such as diabetes, cancer and Alzheimer’s disease, fields in which IRB Barcelona has extensive experience.

Since its setup in 2005, one of IRB Barcelona’s mission is to engage in educational initiatives—ranging from the training of young scientists to initiatives to enhance the public’s understanding of science. The outreach programmes of the centre—such as “Crazy about Biomedicine”, a course that is also in collaboration with the Catalunya-La Pedrera Foundation—cover the whole age spectrum and form a part of the daily activities of the centre. 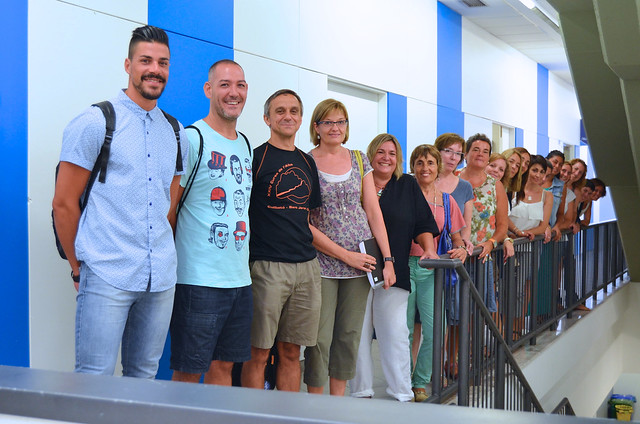