Microscopy moves towards “nanoscopy” and transforms the life sciences 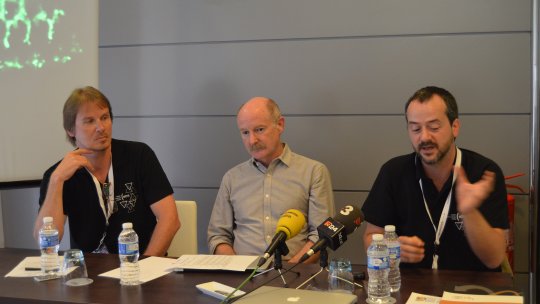 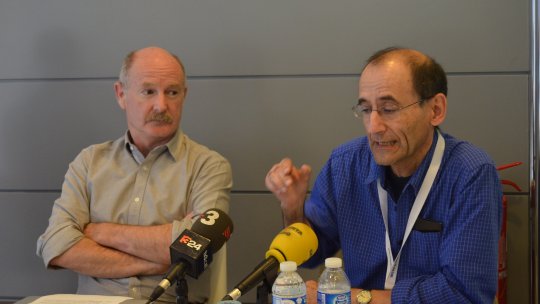 IRB Barcelona/IBMB-CSIC researcher Jordi Casanova says: "seeing the growth of an embryo in vivo makes us return to concepts of developmental biology"
Image 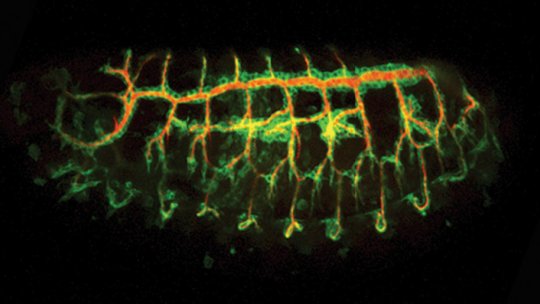 The new microscopes allow the tracking of cell movement within an organism, observation of neuronal synapses, visualization of the spread of cancer, and in vivo monitoring of embryo development.

The development of the 3D microscopy, super-resolution microscopy, and light sheet microscopy (a kind of microscope that illuminates the sample with a sheet of light) pushes biology towards new horizons.

IRB Barcelona and the Centre for Genomic Regulation (CRG) gather 420 experts in the 15th ELMI Meeting, an annual European microscopy congress held this year in Sitges from 19 till 22 May.

Observing the movement of cells inside an organism, following the development of an embryo in vivo over two days, or seeing how synapses form between neurons are the challenges faced by  microscopy and life sciences today. The technological developments in microscopy have become more sophisticated and such advancements bring with them greater opportunity to tackle questions, particularly in the life sciences, specifically in cellular biology.

“What commonly happens is that scientists design projects around the tools available. But while this is true, by addressing questions they also further the development of new technology,” explained Julien Colombelli and Timo Zimmermann in a press conference this morning. These two scientists head the advanced microscopy platforms at the Institute for Research in Biomedicine (IRB Barcelona) and the Centre for Genomic Regulation (CRG) respectively and are co-organisers of the 15th International Microscopy Congress (19-22 May in Sitges), promoted by the European Light Microscopy Initiative (ELMI), the main microscopy network in Europe.

This annual congress is the most long-awaited event for those managing microscopy platforms across leading centres in Europe, for industry—more than 35 companies developing this technology are participating, among them Nikon, Leica, Carl Zeiss and Olympus—and for scientists. This event has brought together 420 participants, of which 290 are researchers.

Advances do not always come about by the hand of specialised companies but sometimes by that of the scientists themselves, who develop a “necessary” technology. This is the case of the British biologist James Sharpe, coordinator of the systems biology programme at CRG and ICREA research professor, who has invented and patented Optical Projection Tomography, a technique that allows him to study mouse embryo development.

“Scientists tend to focus on resolving ever-smaller biological objects: cells, organelles and now individual molecules with super-resolution techniques. However, about 10 years ago we realised that there were technical difficulties in imaging larger 3D multicelular structures such as tissues and organs. For this reason I developed OPT which is ideal for imaging specimens in the mm size range, such as developing embryos”, says.

Sharpe studies the development of limbs in vertebrates as an example of a complex system and to attempt to unravel this process at the level of gene regulation and also of interactions between cells and tissues—something known as systems biology.

The brain is one of the main challenges faced by biology in the XXI century. Rafael Yuste is one of the most renowned scientists in neuroscience and leader of the BRAIN project, which will be developed over the coming years under the patronage of Barack Obama’s administration. “Optical technologies will transform research on the brain,” says Rafael Yuste, researcher of the University of Columbia in New York, who will be giving the opening conference at the ELMI Meeting. “We now have lasers, optical disruptors, and ways of exciting material with light and measuring the effects  like never before. These techniques have reached neurobiology to allow us to observe neuronal activity and to change it. Dyes are used to track neurons and lasers can penetrate 2 mm inside brain tissue to allow its 3D visualization in vivo. Optochemistry, optogenetics, and laser microscopy are the most promising techniques.”

Born in Madrid in 1963, this neuroscientist studies neuronal networks in mice using the novel techniques of neuroimaging and photo-activation. He seeks to explain how the rapid and efficient communication between neurons occurs and the underlying molecular mechanisms that allow this communication.

Cell biologists, particularespecially those specialised in development, will benefit from one of the latest advances in microscopy, namely Light Sheet Microscopy. The most recent and important breakthrough in fluorescence microscopy, this new technique allows the recording of images in vivo over two days without damaging the sample.

“Seeing the growth of an embryo in vivo makes us return to concepts of developmental biology, such as how cell migration takes place, a process that has clear implications in biomedicine, such as in metastasis,” explains Jordi Casanova, group leader at IRB Barcelona and CSIC researcher. Casanova studies the development of the respiratory system (trachea) in fruit fly (Drosophila melanogaster) embryos and follows cell movements in vivo. He focuses on the basic principles of organ development and aims to offer new clues regarding how these principles can contribute to explaining the appearance and spread of cancer. “By observing, we can identify biological processes, something that is needed if we are to understand them,” he adds.

In addition to the capacity of microscopy to record live images, much of the optimisation of this technology has been the conversion of images from 2D to achieve 3D ones of sufficient resolution. The most highlighted breakthrough is electronic cryomicroscopy, in which thicker samples can be used, and that, when combined with tomography techniques, can allow the reconstruction of images in 3D.

The specialists also give special mention to super-resolution as one of the main tendencies of microscopy, whose first applications appeared in 2005. In fact, this technique earned its inventors the Nobel Prize in Chemistry in 2014, as it allowed the limit of 200 nm established because of a classical problem regarding light diffraction to be reduced to 20 nm or almost nanomolecular scale. Scientists can now observe individual molecules, study what they do inside cells, and discover new structures of protein complexes.

“Super-resolution microscopy and other techniques are so cutting-edge that they are not yet accessible to everyone. The next ten years will witness their increasing availability and widespread use in laboratories,” explains Colombelli.

The cost of a complex microscopy system can range from 100,000 euros to more than 2 million euros. “Microscopy is essential for researchers working in the life sciences,” say Zimmermann and Colombelli. “Every euro is well invested if put to full use. Our technology platforms provide service throughout the year and it has an effect on the science produced in our institutes and so the cost-benefit relation is really good.”