Researchers at IRB discover a key regulator of colon cancer 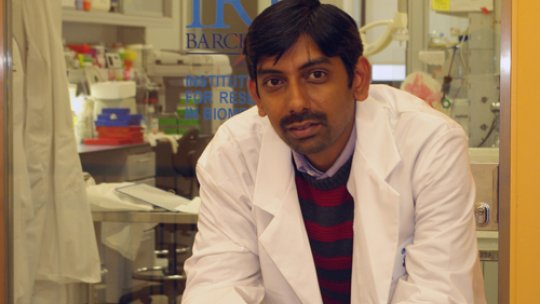 The Indian scientist Jalaj Gupta has worked for six years on p38 in colorectal cancer, and this research formed part of his doctoral thesis (Image by IRB)
Image 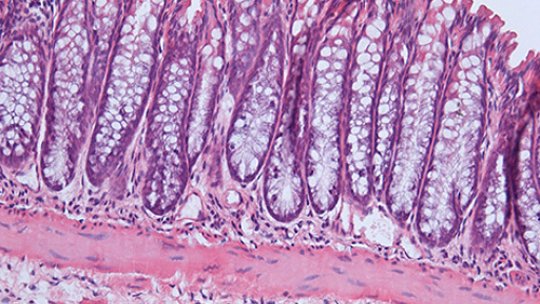 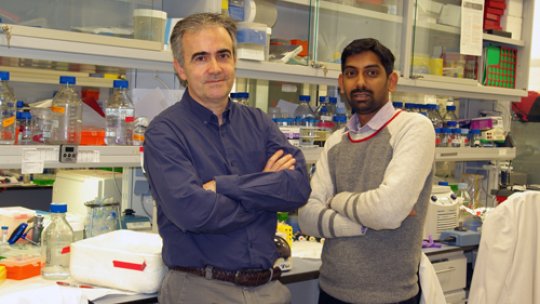 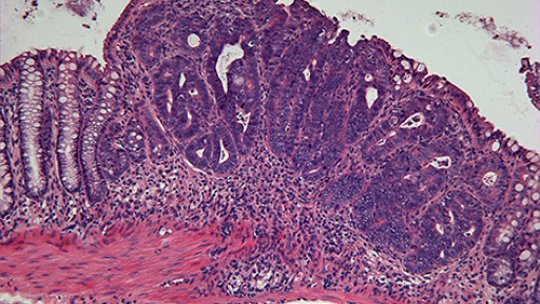 Angel R. Nebreda (left) and Jalaj Gupta in the lab. They are the senior and first authors respectively of the Cancer Cell study on colorrectal cancer (Image by IRB)
Image 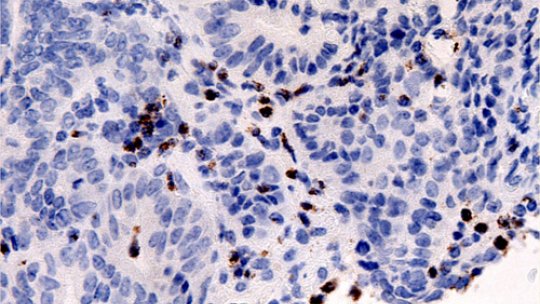 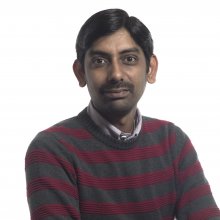 The team headed by Angel Rodríguez Nebreda, ICREA researcher at IRB, identifies for the first time in mice that the p38 MAPK protein is required for the survival and proliferation of colon cancer cells.

In the same study the scientists demonstrate that a p38 inhibitor that has been used in clinical trials for inflammatory diseases shrinks the tumours in mice.

The study, published today in Cancer Cell, has received funding from the BBVA Foundation, the European project InflaCare, the Spanish Government, and the European Research Council (ERC).

A team headed by Angel R. Nebreda at the Institute for Research in Biomedicine (IRB) identifies a dual role of the p38 MAPK protein in colon cancer. The study demonstrates that, on the one hand, p38 is important for the optimal maintenance of the epithelial barrier that protects the intestine against toxic agents, thus contributing to decreased tumour development. Intriguingly, on the other hand, once a tumour has formed, p38 is required for the survival and proliferation of colon cancer cells, thus favouring tumour growth. The study is published today in Cancer Cell, a journal with one of the highest impact factors in cancer research.

The protein p38 is a member of the MAPK family—molecules that transmit signals from outside the cell inside, thus allowing an appropriate and dynamic cell response. This protein is expressed in all cells of the body and it performs highly diverse functions depending on the context and tissue involved.

Nebreda’s group at IRB focuses on the function of p38 in cancer. Their work describes the essential role of p38 in tumour progression for the first time in vivo. Furthermore, the scientists demonstrate that the treatment of mice with a p38 inhibitor previously used in clinical assays causes a considerable reduction in tumour size. The study provides useful information for clinicians and pharmaceutical companies about the role of p38 in the context of colon cancer. Colorectal cancer is now the second leading cause of cancer-related death in the world.

“p38 inhibitors may have clinical applications, but probably—and this forms part of the medicine of the future—these will be in combination with other drugs. We are trying to find out what p38 inhibitors should be combined with to make the tumour, which is now smaller, finally disappear,” explains the Spanish scientist Nebreda, head of the Signalling and Cell Cycle Lab at IRB, BBVA Foundation Cancer Research Professor and ICREA research professor.

The role of p38 in cancer is not clear cut. In this same study, Indian-born Jalaj Gupta who recently obtained his PhD in Nebreda’s lab and is first author of the work, demonstrates that this same protein in a pre-tumoral context, favoured by inflammation of the colon—also known as colitis—impedes tumour development.

It is well-known that patients with chronic inflammation of the intestine, such as that caused by Crohn’s disease, have a greater incidence of colon tumours that the healthy population. In order to study the relationship between inflammation and cancer, Nebreda’s team use mouse models that reproduce this inflammatory context.

“Given that p38 regulates inflammation and also functions as a tumour suppressor in some mouse models, our study addressed how these two functions are integrated during the colon tumorigenesis associated with inflammation”, says Gupta.

An important finding of the present study is related to the contribution of p38 to the maintenance of an intact epithelial barrier, a structure that protects the intestine from toxic agents and pathogens. Mice genetically depleted of p38 in the epithelial cells that form the intestinal barrier were subjected to a cancer-inducing protocol that causes mutations and inflammation.

These animals developed twice as many tumours as a group of p38-expressing mice subjected to the same protocol. The tumour-suppressing capacity of p38 has also been described in cancer of the liver and lung.

“Our study highlights the complexity of p38 functions, both in cancer and in the normal maintenance of tissues, and shows why an inhibitor of this molecule could effectively have undesirable side effects. This is why it is necessary to study in depth the patients and contexts in which treatment with such inhibitors would be suitable,” explains Gupta.

“All drugs currently used to treat cancer have side effects,” states Nebreda, “and in this regard p38 inhibitors would be no exception. However, the administration of such inhibitors to colon cancer patients may be a useful strategy to shrink the tumour in a few days before its surgical removal”.

Nebreda goes on to explain that the basic research performed in his lab seeks to understand better the biology of tumour cells, the roles of the molecules involved and the mechanisms that allow tumour progression. “We try to take this basic information a step further so that it becomes clinically useful when designing new treatments,” says the researcher, who joined IRB, in Barcelona, in 2010, after working in USA, UK, Germany and the CNIO in Madrid.

In collaboration with a team led by Manuel Hidalgo at the CNIO, Nebreda’s group is now studying mice implanted with tumours taken from patients. The preliminary results confirm the relevance of p38 for the growth of human tumours. The researchers also have experiments underway to study the involvement of p38 in the progression of breast and lung tumours.

Published today in the online advanced edition of Cancer Cell and involving the participation of Vassilis Gorgoulis’ group at the University of Athens, the study was started six years ago as part of the European project InflaCare, which addressed the relationship between inflammation and cancer. The study has been completed with funding from the Spanish Ministry of Economy and Competitiveness, and from an ERC Advanced Grant project awarded to Nebreda in 2012 by the European Research Council. Forthcoming research will be performed as part of the latter, which will be completed in 2017.

The competitiveness of Nebreda’s group at IRB is strengthened by structural funding given to the lab by the BBVA Foundation since 2011, when Nebreda was appointed a BBVA Foundation Cancer Research Professor.