Researchers design a nano-carrier to release drugs into damaged cells 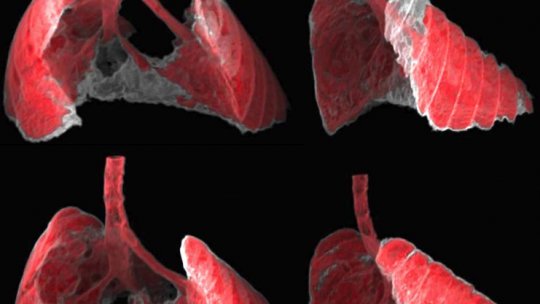 The figure shows two views, frontal and lateral, of the image obtained by CT of the lungs of a mouse with fibrosis (grey areas) before and after receiving nano-therapy directed at senescent cells. (Guillem Garaulet and Francisca Mulero, CNIO)

A team headed by Manuel Serrano at IRB Barcelona has designed a drug encapsulation system that selectively targets senescent cells.

The study paves the way for therapeutic approaches to eliminate senescent cells in many diseases, such as pulmonary fibrosis and cancer.

Senescent cells are damaged cells that do not perform their normal roles anymore but that are not dead –hence they are commonly known as "zombie" cells. These cells interfere with the functioning of the tissue in which they accumulate. Senescence is a cell program that is triggered by many types of damage and senescent cells are present in many diseases. They accumulate in diverse types of tissues during aging, thus contributing to the progressive deterioration associated to aging. Eliminating these zombie cells is one of the challenges facing science today.

In the Cellular Plasticity and Disease lab headed by the ICREA researcher Manuel Serrano at the Institute for Research in Biomedicine (IRB Barcelona) and supported by “la Caixa” Banking Foundation, the researchers devise strategies to eliminate senescent cells.  In a study published in EMBO Molecular Medicine, they present a proof of principle of a drug delivery system with selectivity for tissues that harbour senescent cells.

In collaboration with a team headed by Ramón Martínez-Máñez at the Universidad Politécnica de Valencia, the IRB Barcelona scientists have exploited a particular hallmark of senescent cells in order to design a delivery system that specifically targets them. They have demonstrated its efficacy in cells in vitro and in two experimental mouse models, namely pulmonary fibrosis and cancer. These diseases are characterized by the presence of damaged cells, and in the case of cancer this is particularly true after treatment with chemotherapy.

“This nano-carrier may pave the way for new therapeutic approaches for serious conditions, such as pulmonary fibrosis or to eliminate chemotherapy-induced senescent cells,” explains Manuel Serrano. Another outcome of this study is that these nano-carriers could be used for diagnostic tests of senescence as they can transport a fluorescent compound or marker.

This study, performed by IRB Barcelona in collaboration with the Universidad Politécnica de Valencia, CNIO, the University of Cambridge, CIBER-BBN, and the company Pfizer in the US, is a step towards achieving the capacity to eliminate senescent cells. Developing tools to specifically eliminate senescent cells is currently a central goal for many pharmaceutical companies, among them the one set up by Manuel Serrano himself together with Ramón Martínez-Máñez and José Ramón Murguia, Senolytic Therapeutics, which is located at the Barcelona Science Park and in Boston.

The study has been funded by “la Caixa” Banking Foundation, the Botín Foundation, the European Research Council, CRUK Cambridge Centre Early Detection Programme, the Ministry of Economy and Competitiveness/ERDFs and the Catalan Government.