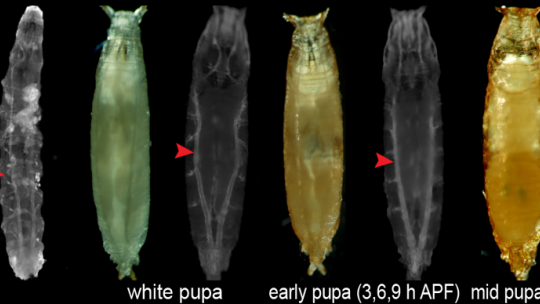 Images of Drosophila tracheas in distinct stages of larval development and metamorphsis; the first stage of progressive reduction can be observed followed by a second stage of dramatic reduction (IRB Barcelona)

The process has two distinct stages, one focused on reducing size and the other on cell death.

An understanding of this process can shed light on cellular mechanisms related to ageing.

The work has been published in the journal Current Biology.

An important component of the development and growth of different parts of the human body is the disassembly of organs and structures from previous stages. The most obvious example is metamorphosis in insects, but this process also occurs in humans during the development of sex glands and during postlactational involution of the mammary gland.

A study co-led by Dr. Jordi Casanova, head of the Development and Morphogenesis in Drosophila laboratory at IRB Barcelona and also IBMB-CSIC researcher, and Dr. Jérôme Solon, formerly at the centre for Genomic Regulation and now a researcher at Ikerbasque, has described the disassembly of the Drosophila fly trachea during metamorphosis.

This process occurs in two stages. The first involves the shortening/shrinkage of the trachea, which leads to the compaction of cell membranes, thus triggering the second stage, which is characterised by cell death. In this second stage, not all the cells of the initial trachea die uniformly. The so-called progenitor cells are saved, thus allowing the development of the adult organ.

“In the end, ageing is a stage of development, where there are structures that, due to use or wear, are disassembled. If we want to understand ageing and work to promote health in old age, it is crucial to comprehend these processes,” says Dr. Casanova.

Drs. Fraire-Zamora and Solon emphasised the need for these interdisciplinary collaborations for future discoveries. “An interesting aspect of this process, which leads to the disassembly of a multicellular organ, is the intricate involvement of physical mechanisms and biological signalling. Together, they regulate cellular decisions and organ remodelling. Therefore, this work highlights that to understand complex processes during animal development or disease, not only do we need to decipher the gene expression or the biochemical activity of cells but we also have to uncover their physical state and understand their mechanics.”

The first author of this study is Dr. Juan J. Fraire-Zamora, a postdoctoral fellow in the labs headed by Dr. Solon and Dr. Casanova. This study is a collaboration between IRB Barcelona, IBMB-CSIC, CRG and Ikerbasque and has been funded by the Spanish Ministry of Science and Innovation, the CERCA Programme run by the Government of Catalonia, the Biofisika Bizkaia Foundation and the Basque Excellence Research Centre of the Basque Government.