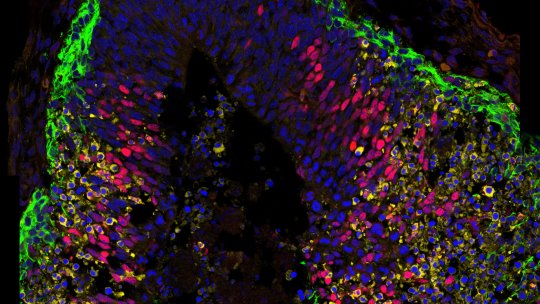 The protein complex augmin is essential for the formation of mitotic spindles, which are responsible for chromosome segregation

Published in eLife, the work sheds light on a fundamental biological process that underlies a variety of human diseases.

Cell division is key to the development of multicellular organisms (including humans), and the misregulation of this process underlies many diseases, including the development and spread of cancer. During cell division, chromosomes are distributed into two daughter cells by the mitotic spindle, a structure built from tube-like filaments termed microtubules.

First author Dr. Ricardo Viais and colleagues at IRB Barcelona’s Microtubule Organization lab, headed by Dr. Jens Lüders, have identified the protein complex augmin as a key element in the division of stem cells during brain development in the embryo. Augmin is a large protein complex that was previously known to amplify microtubule formation, but these new findings identify it as pivotal for this key cellular process.

When the augmin complex is inactivated in the developing brain of mouse embryos, brain development stops and, as a result, embryos die before birth. This is a consequence of the malformation of the mitotic spindle during cell division and the consequent aberrant chromosome distribution into the daughter cells, which leads to cell death.

Cell death caused by loss of augmin can be prevented by deleting the gene p53, which codes for an important tumour suppressor protein that safeguards the integrity of an organism’s genetic information by killing abnormal cells. However, even when p53 is deleted, brain development is aborted in the absence of augmin. The results published in the journal eLife indicate that augmin is essential for stem cell division and development independently of cell death.

“Our study may have implications beyond the insight regarding stem cell proliferation during brain development, since cell division is also crucial for cancer cells to multiply, colonize tissues and form tumours. A hallmark of cancer is the inactivation of p53,” says Dr. Lüders. “Since we found that augmin is essential for cell division and proliferation even in the absence of p53, it may be a potential target to prevent uncontrolled growth of cancer,” he adds.

The work has been carried out in collaboration with Nagoya University in Japan and has received funding from the Spanish Ministry of Science, Innovation and Universities, the Agency for Management and University and Research Grants (AGAUR, acronym in Catalan), run by the Government of Catalonia, and the Japan Society for the Promotion of Science.