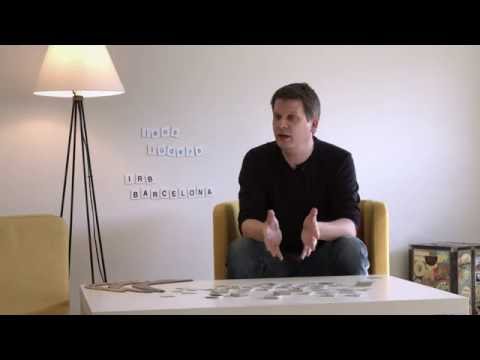 Jens Lüders: "Curiosity as a fuel"

Candidates with a strong interest in the microtubule cytoskeleton who would like to join our group should e-mail a cover letter with CV including contact information for references to jens.luders

Assembly of ordered microtubule arrays involves microtubule organizing centers (MTOCs), which nucleate microtubule polymerization and control attachment and release of microtubules. A well-known MTOC in animal cells is the centrosome. The centrosome consists of a pair of centrioles that is surrounded by the so-called pericentriolar material (PCM). The centrioles, barrel-shaped cylinders composed of precisely arranged triplets of short microtubules and other proteins, have an important role in maintaining a single centrosome per cell, but are not directly involved in the nucleation of microtubules. Nucleation occurs within the PCM and requires γ-tubulin. Together with additional proteins γ-tubulin forms multi-subunit γ-tubulin ring complexes (γTuRCs), which are the main microtubule nucleators at centrosomes and other MTOCs. How γTuRC subunits interact with each other to assemble γTuRCs is poorly understood.

Proper organization of microtubule requires nucleation to be regulated. Different levels of regulation exist. Targeting factors mediate interaction of γTuRC with MTOCs to restrict nucleation spatially. Other interactors might activate γTuRC nucleation activity. An additional level of regulation is provided by kinases that phosphorylate γTuRC subunits. The molecular details of γTuRC regulation are unclear mainly because we lack insight into γTuRC structure and how it is linked to the nucleation mechanism.

During mitosis centrosomes organize microtubules at the poles of the mitotic spindle. Abnormal centrosome number and function have been implicated in genomic instability, cancer development and progression, and are common in tumor cells. During metastasis the microtubule cytoskeleton has roles in cell morphogenesis, invasion, and migration. As organizers of mitotic spindle poles centrosomes are also important for asymmetric stem cell divisions. For example, defects in certain genes encoding centrosome- and spindle-associated proteins cause microcephaly, a disorder of neurogenic mitosis that results in reduced fetal brain growth. Neurons form long cellular processes and have to transport cargo over very long distances. Therefore neurons are particularly sensitive to perturbations of the microtubule network. Impaired microtubule-based transport can lead to neurodegeneration and may also have a role in the pathologies observed in Parkinson’s and Alzheimer’s disease.

Microtubule-dependent processes such as intracellular transport, cell motility and segregation of chromosomes during mitotic and meiotic divisions, require microtubules to be organized into highly ordered arrays. Failure to properly organize spindle microtubules during mitosis, for example, has been implicated in genomic instability and cancer. In addition, defects in components of the microtubule cytoskeleton are the cause of various developmental and degenerative disorders. The overall goal of our lab is a molecular understanding of how cells generate and remodel distinct types of microtubule arrays during cell cycle progression and during cell differentiation, and how errors are linked to disease. We study these processes in cultured primary cells and cell lines, and by in vitro reconstitution using purified proteins and extract prepared from eggs of the frog Xenopus laevis. 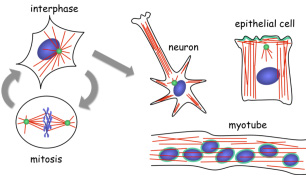 Organization of the microtubule cytoskeleton. The distribution of microtubule organizing centers (MTOCs; green) and the geometry of microtubule arrays (red) are variable and depend on cell cycle stage and cell type. Nuclei are shown in blue.

iii) Study how protein phosphorylation, alongside other signals such as the Ran(GTP) gradient, control the centrosomal and microtubule machinery during G2 and mitosis (with Joan Roig, see http://nek9.wordpress.com/)

This group is financially supported by the following: