The absence of a single protein spurs muscle aging in mice 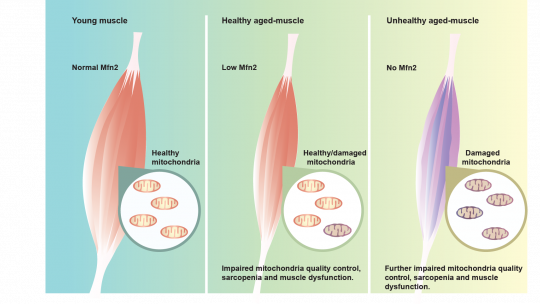 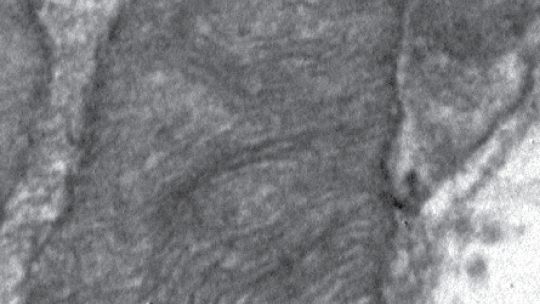 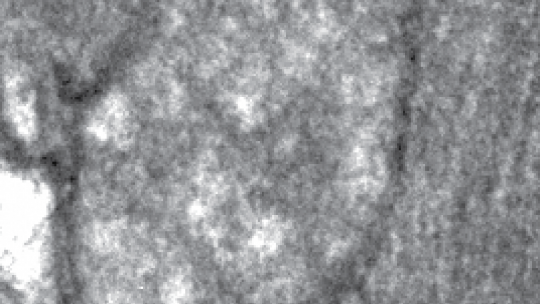 IRB Barcelona researchers discover that the loss of the protein Mitofusin 2 in the muscles of young mice speeds up aging and causes early sarcopenia, thus leading to the muscle quality of aged mice.

Sarcopenia, which is muscle wastage and the accompanied loss of strength, is one of the most weakening conditions of old age and it has no treatment.

The scientists propose that stimulating Mitofusin 2 activity would provide a good strategy through which to ameliorate sarcopenia.

One of the alterations that most affects the quality of life of the elderly is muscle wastage and the resulting loss of strength, a condition known as sarcopenia. At about 55 years old, people begin to lose muscle mass, this loss continues into old age, at which point it becomes critical. The underlying causes of sarcopenia are unknown and thus no treatment is available for this condition. A study at the Institute for Research in Biomedicine (IRB Barcelona) has discovered that Mitofusin 2 is required to preserve healthy muscles in mice. In the paper, which has been published today in The EMBO Journal, these researchers indicate that this protein could serve as a therapeutic target to ameliorate sarcopenia in the elderly.

Headed by Antonio Zorzano, coordinator of the Molecular Medicine Programme at IRB Barcelona, the scientists observed that during aging mice specifically lose the expression of Mitofusin 2 in muscle. They demonstrate that low activity of this protein in 24-month old mice (the equivalent of a person aged 80) is directly associated with muscle wastage and the sarcopenia observed. The scientists confirm the link between the loss of Mitofusin 2 and muscle aging when the expression of the protein is suppressed in the muscles of 6-month-old animals (equivalent to a person of 30) as these animals showed accelerated aging, reproducing thus muscle conditions of aged mice.

"Over five years we have collected sufficiently significant evidence that demonstrates the contribution of Mitofusin 2 to the maintenance of good muscle health in mice and that allows us to consider a therapeutic strategy for sarcopenia," explains the first author of the article David Sebastián, an IRB Barcelona and CIBERDEM researcher. "Sarcopenia is not a minor issue because it impedes some elderly people from going about their everyday lives," explains Antonio Zorzano. "If we want to boost the health of the elderly then this problem has to be addressed," he stresses. The world’s population is aging. The United Nations estimates that in 2050 there will be 2.1 billion people over 60, a figure that accounts for 22% of the world population. Currently, this figure stands at 12%.

Dr. Zorzano’s lab is running a study in collaboration with physicians working in geriatric medicine at Sant Joan de Déu Hospital to demonstrate that Mitofusin 2 is also repressed in human aging. "We need to demonstrate this if we want to translate our findings to clinical practice," he says. In addition, this group also has the technology ready to search for pharmacological agents capable of boosting Mitofusin 2 activity.

The researcher also explains another phenomenon of extreme muscle degeneration called cachexia, a condition associated with disease, especially cancer. "If we can find a molecule that improves muscle status, it should be tested against cachexia in cancer patients," states Zorzano, "because in some cases this is the real cause of death in this patient group."

The molecular mechanisms behind muscle aging

Thanks to this study, the researchers have also identified and described an autophagy rescue system which kicks in regardless of Mitofusin 2 levels and allows cells to partially recover the mitochondrial recycling system in skeletal muscle. The scientists suggest that this could serve as an alternative metabolic mechanism used by Mitofusin to increase skeletal muscle autophagy and to maintain a healthier mitochondrial system.

This study has been supported by funding from the Ministry of the Economy and Competiveness, the Government of Catalonia, the CIBERDEM Centre and the European project DIOMED, part of the INTERREG-SUDOE-FEDER programme, which is led by Antonio Zorzano.