The colon has a safety mechanism that restricts tumour formation 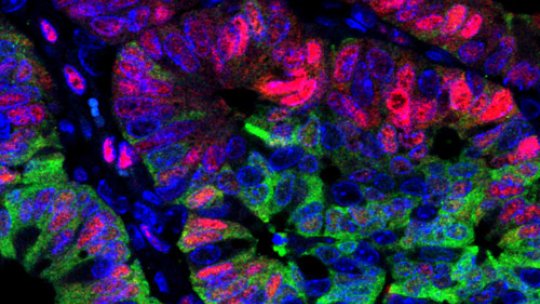 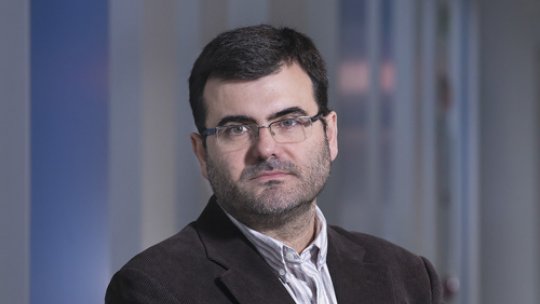 Image of a benign colon tumour. In green, adenoma stem cells. The scientists have discovered that the colon has a safety mechanism to prevent the self-renewal of adenoma stem cells (Image: Colorectal Cancer Lab, IRB Barcelona)

When adenomas appear in the colon, the same cells of the tissue produce a molecule that neutralizes its progression.

Adenomas, which are highly prevalent in the population, provide the substrate on which carcinomas develop.

Colon cancer development starts with the formation of benign tumours called adenomas. It is estimated that between 30% and 50% of people over 50 will develop one of these tumours. These adenomas or polyps are the pre-cancerous lesions that, once they accumulate further genetic mutations over many years, can progress to colon cancer. A team headed by scientists at the Institute for Research in Biomedicine (IRB Barcelona) and headed by the ICREA researcher Eduard Batlle has discovered that the colon has a safety mechanism to restrict the formation and growth of adenomas. The study was published on Sunday in the advanced online edition of the journal Nature Cell Biology and will be the cover of the July issue.

The scientists have observed that the formation of an adenoma in the colon is accompanied by an increase in the production of a molecule called BMP (bone morphogenetic protein). The study explains that BMP limits the self-renewal capacity of adenoma stem cells, thus impeding the rapid development of the lesion.

“Colon epithelial cells respond to the presence of these tumours and attempt to suppress them or at least control them through the BMP pathway. Without this safety circuit, we would have many more polyps showing rapid growth. Colon cancer is a disease that develops slowly and this slowness may be caused by this safety mechanism,” says Eduard Batlle, head of the Colorectal Cancer Laboratory at IRB Barcelona whose research interests include the study of how colon cancers arise and how they become malignant.

Do we all have the same capacity to deal with polyps?

One hypothesis that has arisen from the study is that we are not equally protected and that there are genetic variations in the population that determine that some people have more robust safety mechanisms to respond to polyp formation than others.

This hypothesis is supported by the fact that the scientists have identified a genomic region through which BMP protein production is controlled, that is to say, the specific site that regulates the safety circuit triggered when adenomas are detected. It is the same site that holds certain genomic variations in the population that are associated with susceptibility to colon cancer. These genomic variations have been revealed by studies in the population and by analysis of the genomes of colon cancer patients that are available in data bases such as that of the 1000 Genomes Project Data.

“We provide a plausible explanation of why certain genomic variations (called snip – SNP-) are associated with a greater risk of colon cancer and we believe it is because these variations affect this safety system that protects us from adenomas,” explain the scientists.

“This basic study will allow more defined research into the genomic variations associated with colon cancer that are in the region where BMP is regulated.” A better understanding of the mechanism that accelerates or restricts the development of cancer may allow, for example, the discovery of new biomarkers to better identify the population at greatest risk of colon cancer and even the current degree of risk.

Colon cancer is one of the four most prevalent cancers, together with breast, prostate and lung cancer, and it has a global incidence of 1,600,000 cases per year with a mortality rate of 50%. The researchers highlight that if those over 50 underwent preventive tests such as colonoscopies then 80% of the deaths from this disease would be averted.

The study has involved the participation of groups from the “Centro Nacional de Investigaciones Oncológicas”, the “Hospital Clínico de Barcelona-IDIBAPS-UB”, and the Centre for Genomic Regulation. Funding was provided by an ERC Grant from the European Research Council awarded to Eduard Batlle, from the Josep Steiner Foundation of Switzerland, and from the Spanish Ministry of the Economy and Competitiveness.