A study on breast cancer conducted at IRB Barcelona identifies the key role of p38 in safeguarding tumour cells against the excessive accumulation of DNA damage, which would otherwise cause cell death.

p38 blockage has been shown to increase the death of tumour cells, thus causing tumours to shrink.

The combination of p38 inhibitors with chemotherapeutic drugs (taxanes) strengthens, accelerates or prolongs the antitumour effect in patient-derived tumours grown in mice.

Greater knowledge of the mechanisms that contribute to the survival of tumour cells is key to vanquishing them. The study published today in the journal Cancer Cell, headed by Angel R. Nebreda, ICREA researcher at the Institute for Research in Biomedicine (IRB Barcelona), reveals a new protective mechanism for tumour cells in breast cancer and identifies novel therapeutic targets to treat this condition. The study has been funded by competitive Advanced and Proof of Concept grants from the European Research Council (ERC).

The results demonstrate that the p38alpha (p38 from now on) protein protects tumour cells by turning on a DNA repair mechanism. In this regard, p38 safeguards tumour cells against the excessive accumulation of DNA errors, or mutations. “Tumour cells inherently tend to accumulate DNA damage but in some this accumulation is greater, and we have observed that these cells are more dependent on p38 activity,” explains Nebreda.

Breast cancer is the most lethal tumour in women, causing 521,000 deaths worldwide each year, 6,213 of these in Spain (sources: World Health Organization (2012) and SEOM (2017)). Breast cancer can be classified into three types: estrogen receptor-positive (ER), HER 2-positive or triple negative. The experiments were performed in a mouse model characterised by the development of triple negative breast tumours. This kind of tumour accounts for 15 % of breast cancer cases, and the only treatment to date consists of generic chemotherapy. In contrast, targeted treatments are available for the two other types. These discoveries could pave the way to improving treatment options for triple negative breast tumours.

The researchers used p38 inhibitors to block the action of this protein in tumour cells. These inhibitors have already been used in clinical assays involving patients, but for other diseases. In this study, p38 inhibitors were combined with classical chemotherapeutic drugs called taxanes, such as paclitaxel and docetaxel. As expected, the cells treated with combined therapy showed greater accumulation of genomic instability, that is to say, they carried more DNA damage and a greater number of chromosome variations. Consequently, many of these cells died and the tumour mass shrank considerably.

The scientists used nine tumours from patients, which were grown in mice. In seven of these tumours, including ER and triple negative, the p38 inhibitor strengthened, accelerated or prolonged the antitumour effect of the taxanes.

“Taxanes prevent cell division by damaging chromosomes and causing chromosome instability. As suspected, given that p38 hinders this action, if we switch off the function of this protein in cells, they lose their protection and taxanes can be more effective,” explains Begoña Cánovas, “la Caixa” PhD student and first author or the study together with Ana Igea, postdoctoral fellow and current IRB Barcelona Alumnus at the University of Vigo.

The researchers also believe that they have found a possible explanation as to why two of the tumours analysed did not respond to the treatment, thus allowing differentiation between patients who may benefit from those who will not. They observed that the effectiveness of the treatment was dependent on the degree of chromosomal instability of the tumour cells. The greater the instability, the more effective the treatment.

“From the point of view of applications, it is one of the most interesting findings of this study as there are straightforward methods to measure chromosomal instability in tumours. But our findings have to be confirmed in a greater number of tumours from patients,” says Nebreda.

“We hope that these studies are done, either in collaboration with our group or in other labs, and, if the results are confirmed, that the pharmaceutical industry takes the lead in performing the trials to test the efficiency of the combined treatment in patients”, he adds.

In addition to the ERC, this study was supported by the Ministry of Economy and Competitiveness of Spain, the Government of Catalonia and the BBVA Foundation. The work was done in collaboration with Roger Gomis, specialist in breast cancer, and Travis Stracker, specialist in genomic instability, both at IRB Barcelona; Eva Gonzalez-Suarez and Violeta Serra at IDIBELL and VHIO, respectively, in Barcelona; the University of Zurich, in Switzerland and the University of Austin, in the United States.

The article published in the journal Cancer Cell by IRB Barcelona scientists identifies the function of the protein p38 in the development of breast cancer and proposes new therapeutic approaches. 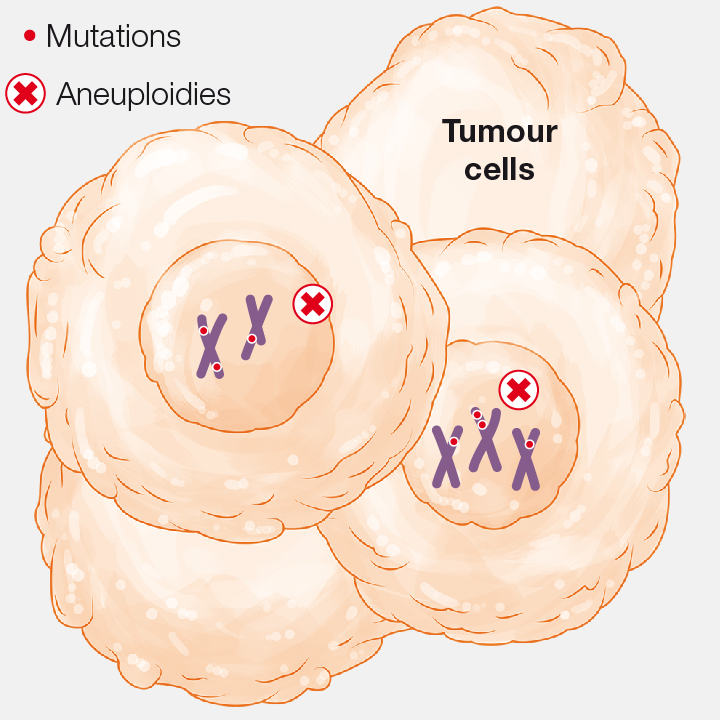 This regulatory protein is required to correct many of these errors before the cell divides. 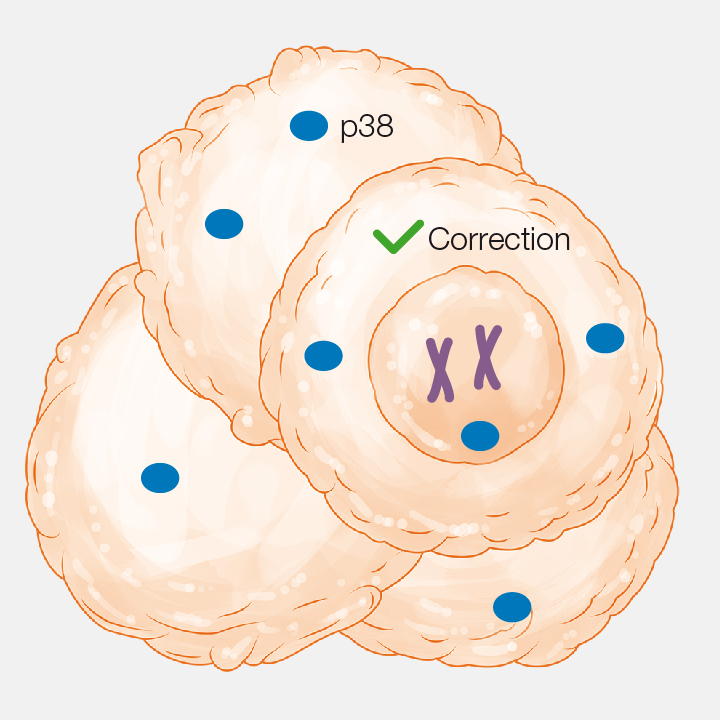 The blockage of p38 causes an excessive number of genomic errors and the tumour shrinks. 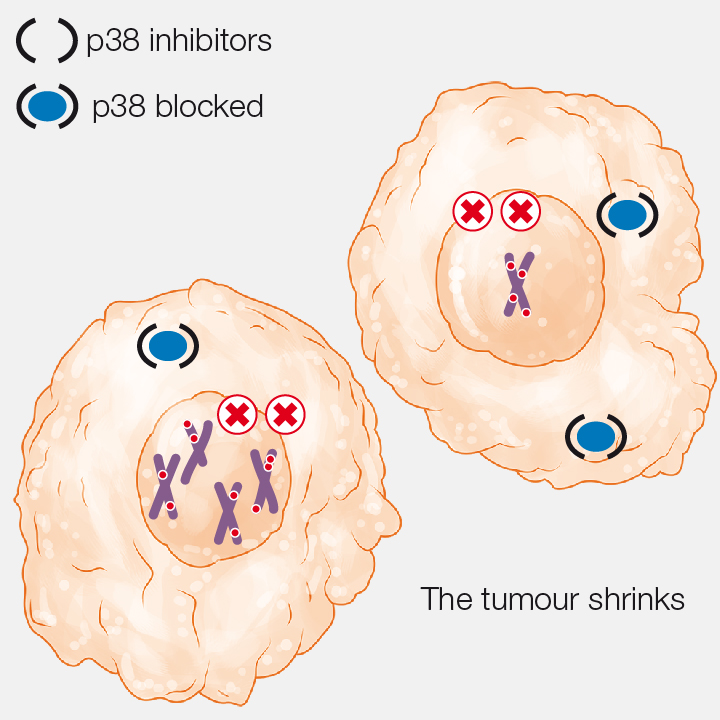 When p38 inhibitors are used in combination with taxanes (the chemotherapy agents most widely used for the treatment of breast cancer), the antitumoral effect is boosted. 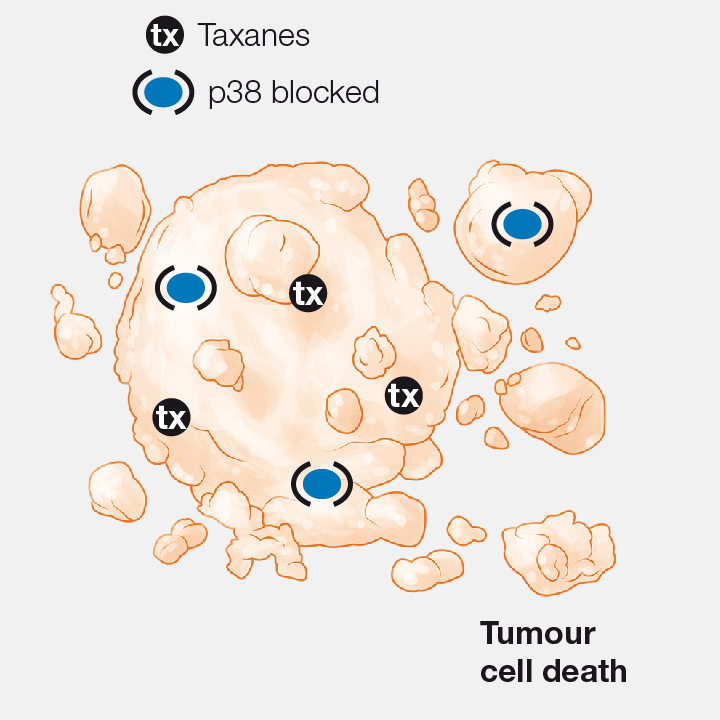 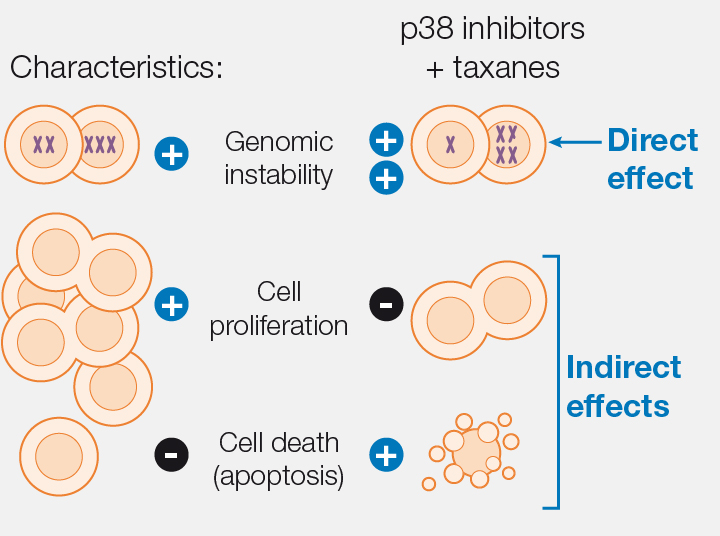 The treatment has been tested in tumour cells derived from patients and grown in lab mice. 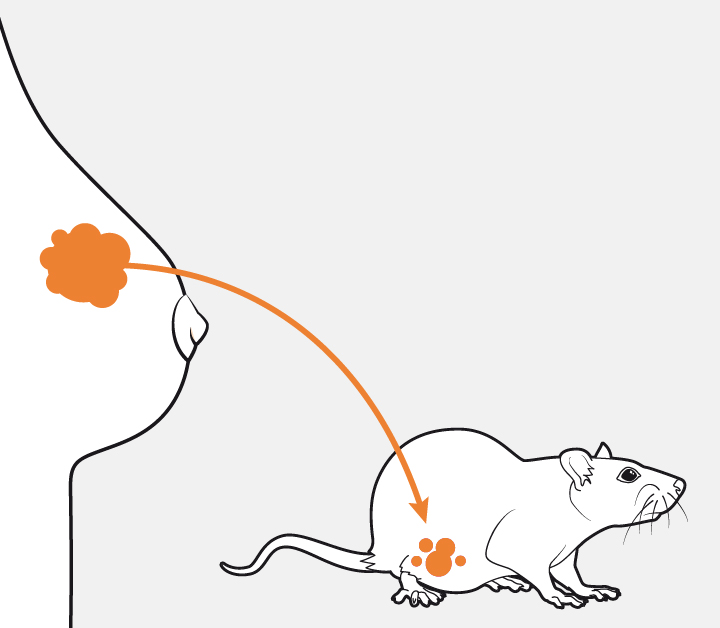 Causes of deaths from cancer among women in 2012 (worldwide) 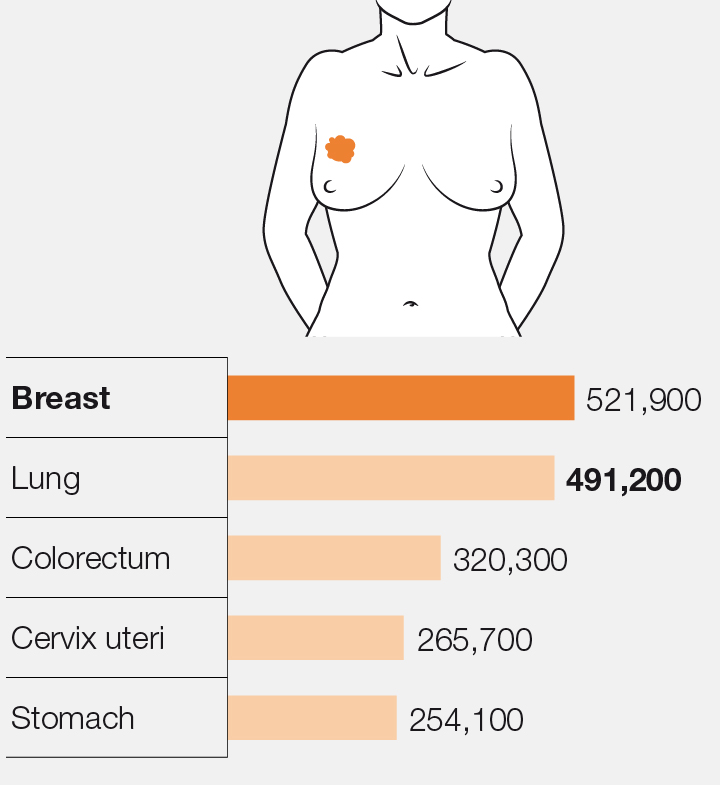 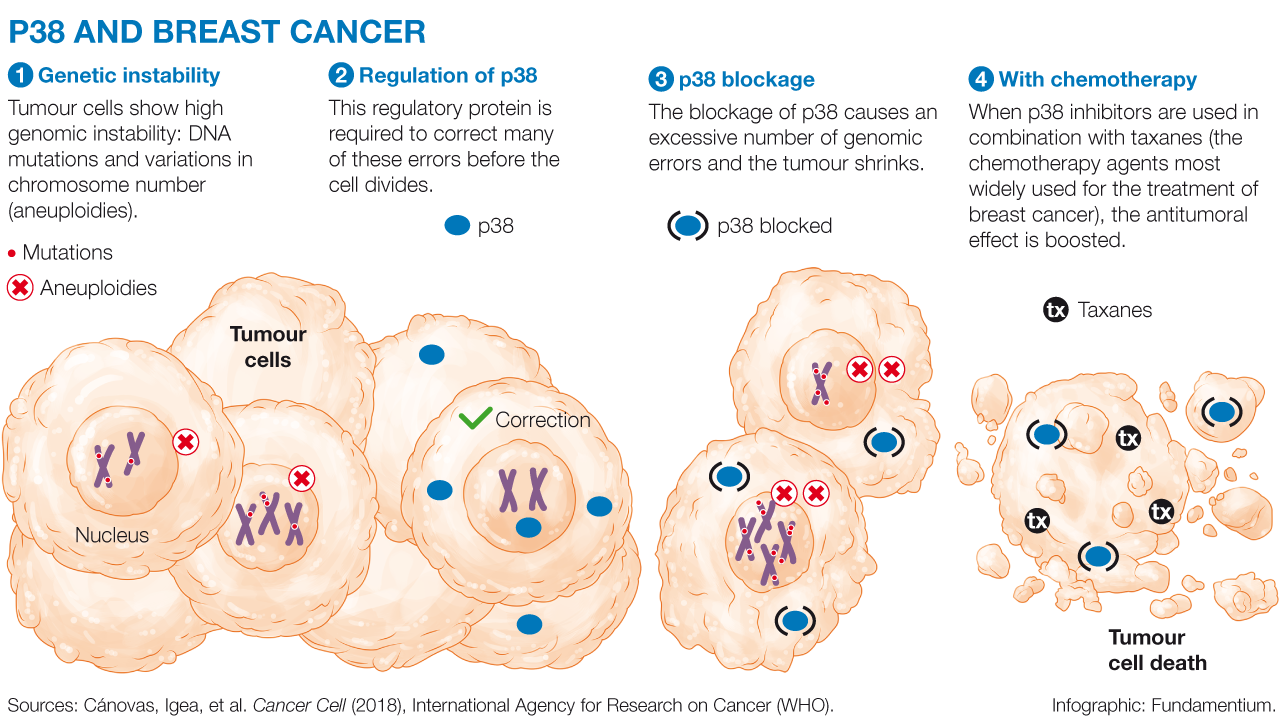 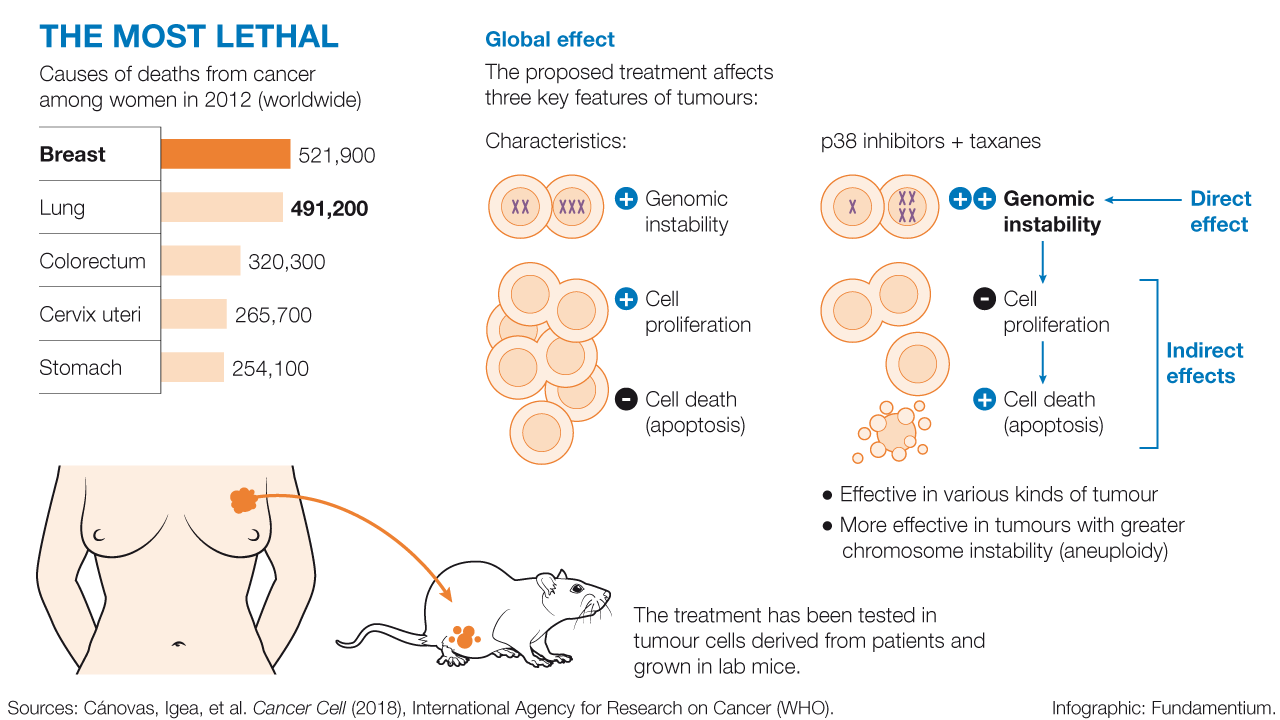 The most common breast cancer under siege

The newspaper ABC has reported on a new project to be launched by IRB Barcelona researcher Roger Gomis thanks to a grant from the Fundación Fero y Mango. Focusing on luminal breast cancer, one of the most common subtypes, the project aims to decipher the “dialogue” between tumour cells and bone stem cells. This information can then be used to design therapeutic targets and to limit the capacity of these cells to metastasize. “This is a groundbreaking approach to tackle metastasis in this kind of cancer,” says Gomis.

Understanding the effects of chemotherapy

The newspaper La Tribuna de Albacete has interviewed IRB Barcelona researcher Erika López Arribillaga about a grant awarded to her on 24 September by the Spanish Association Against Cancer (AECC). López Arribillaga’s project aims to unravel the long-term effects of some chemotherapy treatments on colorectal cancer patients.