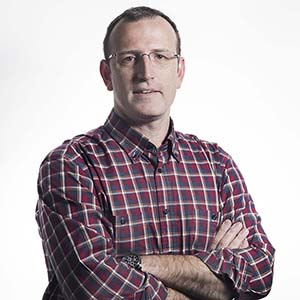 Born in Barcelona in 1972. He obtained his BSc in Biochemistry (1996), MSc in Biotechnology (1998) and PhD in Biochemistry & Molecular Biology (2000) from the Autonomous University of Barcelona. He then joined the Structural Bioinformatics Group at the European Molecular Biology Laboratory (2001) where he did his postdoctoral training and became Staff Scientist (2003).

Since April 2006, Patrick Aloy is an ICREA Research Professor and Principal Investigator of the Structural Bioinformatics Lab in the Institute for Research in Biomedicine (IRB Barcelona).
His main scientific interests are in the field of structural bioinformatics, in particular, the use of high-resolution three-dimensional structures to reveal the molecular details of how macromolecular complexes and cell networks operate.