Advances made to combat cancer relapse 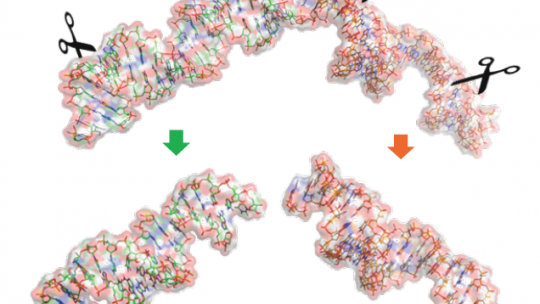 Scheme of the intracellular processing of the 2shRNAs by the activity of Dicer enzyme, producing two independent fragments of shRNA, one against each target (M Terrazas, IRB Barcelona)

Modesto Orozco’s lab has published a paper in Chemical Communications about a therapeutic tool to prevent treatment resistance in breast cancer.

The tool has been tested in tumour cells in vitro and will now need to be tested in animal models before moving on to the development of a valid treatment for patients.

One of the greatest limitations of current treatments against cancer is the development of resistance, which implies the reappearance of the disease because the treatment has stopped being effective. The lab headed by Modesto Orozco at the Institute for Research in Biomedicine (IRB Barcelona) has developed a tool to tackle resistance in cancer. The therapeutic approach has been validated in breast cancer cells in vitro, and the results have been published in the scientific journal Chemical Communications.

Combined drug therapies play a prominent role in the fight against resistance to cancer treatments. However, “various problems” are associated with the drug combinations that have been approved to date, including cooperative toxic effects, lack of efficiency and deficient bioavailability, says Montserrat Terrazas, first author of the article and associate researcher at IRB Barcelona.

Modesto Orozco’s team has designed and synthesised what they call “2shRNA”, a new bi-functional tool based on ribonucleic acid (RNA), that is to say, it can simultaneously attack two therapeutic targets involved in drug resistance pathways, and, in addition, it can bind to other molecules to improve the performance and efficiency of the effect.

The nanostructure of this new tool presented by IRB Barcelona has shown low toxicity and excellent antiproliferative properties in HER2+ breast cancer cell lines resistant to drugs such as Lapatinib.

“We believe that 2shRNA could pave the way for significant advances in the treatment of breast cancer. And, more important still, we also consider that its structural characteristics could be useful for the treatment of other types of tumour,” says Terrazas.

The next step in the development of this tool involves testing its efficacy in animal models. To this end, the lab has received a “Proof of Concept” grant from the European Research Council to continue with the experiments.

In view of the positive results already obtained and the potential perceived, IRB Barcelona, through its Innovation Office, has patented the tool and its possible therapeutic applications, with the aim to facilitate its transfer to the biotech sector.

This study has been funded by the Ministry of Science through ERDFs and the European Research Council. Montserrat Terrazas is the recipient of a Miguel Servet grant from the Institut de Salut Carlos III.