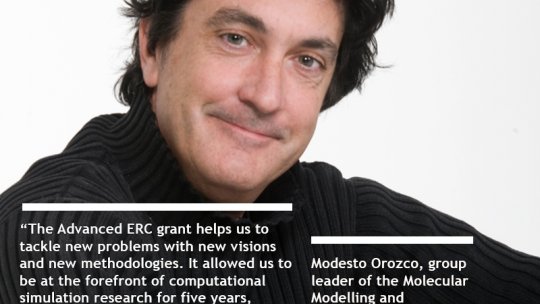 Scientist Modesto Orozco, ERC Advanced Grant holder, has been awarded a ERC Proof of Concept in the 2018 call

IRB Barcelona scientist, Modesto Orozco has been granted 150,000 euros to optimise and validate a promising anti-tumour therapeutic tool over 18 months.

The European Research Council (ERC) has announced the first round of 2018 ERC Proof of Concept grants to support ideas that can bring about social benefit. One such idea, the project called “2shRNA”, headed by IRB Barcelona group leader, Modesto Orozco, will receive 150,000 euros to develop the initiative over 18 months.

The project aims to optimise and validate a promising therapeutic tool devised in his lab on Molecular modelling and bioinformatics to be combined with other drugs for the treatment of breast cancer.

Combination therapies are now widely used, and an example of such therapy is the treatment of drug resistance in cancer. However, the drug combinations approved to date have several drawbacks, such as cooperative toxicity, lack of efficiency, and poor bioavailability.

Modesto Orozco’s lab has designed and synthesized “2shRNA”, a new therapeutic tool based on bifunctional ribonucleic acid (RNA) that can simultaneously attack two therapeutic targets involved in drug resistance pathways and that can also bind to other molecules to enhance their delivery and efficacy. In previous studies, the nanostructure of this new molecule showed low toxicity and high anti-proliferative activity against HER2 + breast cancer cells. “This new ERC grant will allow us to identify a practical application for this tool in anti-tumoral therapies,” says Orozco, also full professor at University of Barcelona.

The project seeks to optimise and validate this new RNA tool by combining last generation bioinformatics and chemical refinement with biological evaluation in cultures of breast cancer cells and in mouse models that carry human tumours.

“The proposed strategy is a new therapeutic approach that has great potential to circumvent drug resistance in breast cancer, a disease that is a public health challenge,” says Orozco. The scientist explains that this RNA-based tool, which has the capacity to administer two drugs in a single dose, could improve patients’ quality of life as fewer doses would be needed to halt the progression of the disease.