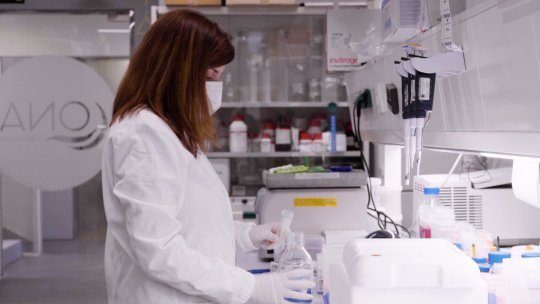 The spin-off from IRB Barcelona and ICREA is developing a drug for the treatment of metastatic cancer.

Ona Therapeutics closed a series A funding round of €30 M in 2020, which covers the costs of completing the preclinical development of the medication.

The Government of Catalonia and the Catalan Foundation for Research and Innovation (Catalan acronym FCRI), yesterday announced the winners of the 2021 National Innovation Awards. In this regard, IRB Barcelona and ICREA have been recognised in the category of “National Award for the Creation of a Science-Based Company” for starting Ona Therapeutics.

Founded in 2019 by Dr. Salvador Aznar-Benitah and Dr. Valerie Vanhooren, the IRB Barcelona and ICREA spin-off focuses its activity on the discovery and development of biological drugs that target lipid metabolism to treat metastatic cancer. The company was launched with the support of Asabys Partners and closed a Series A funding round of €30 M in 2020 with the participation of Alta Life Sciences, Ysios Capital, FundPlus (Belgium) and BPI France (France).

The science underlying Ona Therapeutics is based on results published in Nature by Dr. Aznar-Benitah in 2017 that show that blocking the pathways that allow fat metabolism prevents the formation of metastases and is potentially capable of removing existing ones.

“ONA Therapeutics is the result of fundamental research carried out at IRB Barcelona to understand and tackle the problem posed by metastasis. One of the goals of our Institute is the generation of knowledge to cure diseases for which there are no effective treatments and to ensure that this knowledge benefits society in the form of new treatments. ONA Therapeutics is the vehicle through which to allow this research to reach the patient,” says Dr. Francesc Posas, director of IRB Barcelona.

IRB Barcelona's commitment to innovation has led to the launch of 7 spin-offs, which together have generated investments amounting to €50 M, according to the 2021 BioRegión Report, published by Biocat. “The foundation of Ona Therapeutics falls in a privileged context in which previous experience and the entrepreneurial spirit that we foster at the Institute allow us to identify the most promising technologies and bring them closer to the market,” says Dr. Cristina Horcajada, head of the Innovation Department at IRB Barcelona.

“When we identified the cells responsible for initiating metastasis, we observed that they were highly dependent on fat metabolism and that, by blocking the uptake of fatty acids, metastasis did not occur. We were immediately aware that this discovery has enormous therapeutic potential and this laid the foundations for Ona Therapeutics,” explains Dr. Aznar-Benitah, co-founder of Ona Therapeutics, ICREA researcher, and head of the Stem Cell and Cancer laboratory at IRB Barcelona.