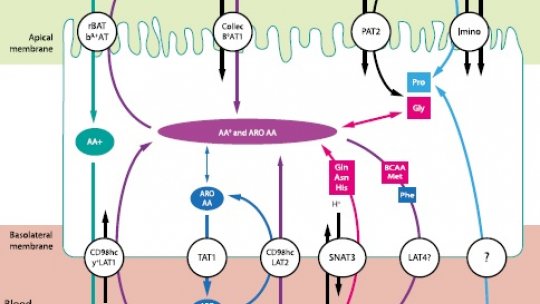 The new study analyses the dysfunction of basolateral transporters through a transgenic animal model.

This study is led by Manuel Palacín from IRB Barcelona and Virgínia Nunes from IDIBELL.

A scientific team has described for the first time the in vivo synergy action of the neutral amino acid transporters LAT2 and TAT1 and their participation in the renal absorption. The new study, conducted with animal models, is led by the researchers Manuel Palacín from the Institute for Research in Biomedicine (IRB Barcelona), and Virgínia Nunes from Bellvitge Biomedical Research Institute (IDIBELL), both members of the Rare Diseases Networking Biomedical Research Center (CIBERER).

In the study, published in Journal of the American Society of Nephrology (JASN), the following experts have also participated: Antonio Zorzano, UB Professor and head of the Complex metabolic diseases and mitochondria Lab at IRB Barcelona, Rafael Artuch from CIBERER and François Verrey from the University of Zurich, among others.

Amino acid renal reabsorption –structural components of proteins- is an essential process to keep the internal medium balance of the body (acidity, ion concentration, etc.). Deficiencies in the amino acid renal transport can cause metabolic diseases (aminoacidurias) which can be severe, such as cystinuria or Hartnup disorder. Most of the known aminoacidurias are caused by alterations in proteins found in the apical renal membrane. However, there is also a unique disease in humans, which affects cationic amino acids- associated with the dysfunction of a basolateral transporter of amino acids.

The new study analyses the dysfunction of basolateral transporters through a transgenic animal model (not expressing the Slc7a8 or Slc16a10 genes) created by the teams of Virgínia Nunes, Manuel Palacín, head of the Amino Acid Transporters and Disease Lab at IRB Barcelona, and François Verrey. In particular, these genes are related to the synthesis of the component of the neutral amino acid exchanger LAT2/CD98hc, and the aromatic amino acid transporter TAT1, respectively.

In this experimental model –twice transgenic for LAT2 and TAT1- the lack of amino acid transporters altered the renal reabsorption process so that different amino acids were lost through urine (basic, aromatic, neutral, etc.), specific transporter and proline transporters. At the same time, through the extensive analysis of the gene expression of more than fifteen transporters and potential variants, researchers determined that the y+LAT1/CD98hc basolateral transporter had a potential balancing function facing the lack of LAT2 and TAT1.

The new study shows for the first time, the functional synergy of the LAT2 and TAT1 transporters in vivo, and it explains that the basolateral flow of LAT2 substrates depends on the aromatic amino acid recycling via TAT1. Therefore, this is the first scientific study that notes the participation of LAT” in the process of renal reabsorption in amino acids. The results of the study, together with the identification of compensatory mechanisms by other transporters, could explain the difficulties to identify neutral aminoacidurias in humans caused by defects in basolateral transporters.

Source of information: University of Barcelona