Disclosure of the mechanism that regulates the end of inflammation 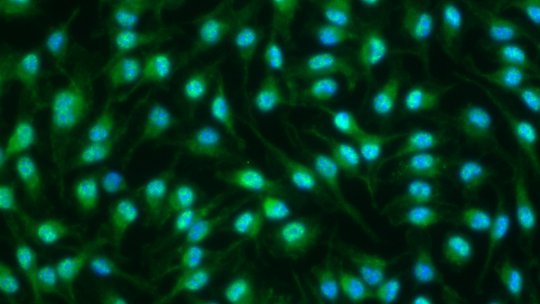 During the inflammatory phase, inflammatory markers (in green) are localized in the macrophages nucleus (in blue) to activate the synthesis of inflammatory ARNs.

The mechanism proposed is based on a balance between two elements, namely the pro-inflammatory TTP protein, and CPEB4 protein, the latter being essential to terminate inflammation.
If the process is not well regulated and the inflammation does not stop, it can trigger chronic inflammation, which is related to a wide range of diseases.
The work has been published in the journal eLife.

Inflammation is a temporary reaction to infection or injury that is intended to attract cells of the immune system so they can repair the damage. However, when the process is not well regulated, the body continues to send inflammation signals when the injury has already been repaired, thus leading to the development of chronic inflammation, which is related to highly prevalent health conditions, such as diabetes, cardiovascular disease, chronic obstructive pulmonary disease (COPD), and others.

Scientists at IRB Barcelona led by ICREA researcher Dr. Raúl Méndez, head of the Translational Control of Cell Cycle and Differentiation lab,  have described the cellular mechanism that coordinates the end of inflammation and have observed that CPEB4 protein plays a key role in the process mediated by macrophages. Published in the journal eLife, the study details how, upon the onset of inflammation, a balance is physiologically launched between TTP protein (pro-inflammatory) and CPEB4 (anti-inflammatory) to regulate the start and end of inflammation.

Surprisingly, the researchers observed that, when inflammation begins, both the pro-inflammatory and anti-inflammatory pathways are stimulated; however, the latter is activated with a certain time lag.

“Inflammation must be limited over time, otherwise what is designed to repair and resolve infections and injuries becomes a problem in itself. In this work, we describe a highly sensitive and precise cellular mechanism that regulates this process. Understanding this mechanism is crucial to be able to address diseases that occur with chronic inflammation, which unfortunately are many,” says Dr. Méndez.

The work, which has been carried out in collaboration with Signalling and Cell Cycle Laboratory, led by Dr. Ángel Nebreda at IRB Barcelona, details how mice lacking CPEB4 protein fail to complete the inflammatory process and, consequently, suffer septic shock. Researchers have observed that patients with sepsis have very high levels of CPEB4, in an attempt to reduce that inflammation.

Stability of messenger RNA as a precision "tool"

Proteins are responsible for carrying out most cellular functions, such as the activation and deactivation of an inflammatory process. Cells have many mechanisms through which to regulate the levels of each protein, and one of them is through messenger RNA molecules, which are the previous step to protein production. In this mechanism that defines the start and resolution of inflammation, the proteins that orchestrate it regulate the stability of messenger RNA molecules.

Future laboratory work will focus on studying this regulation mechanism in other cells of the immune system and other scenarios in which temporal cellular responses occur to certain stimuli, such as food intake.