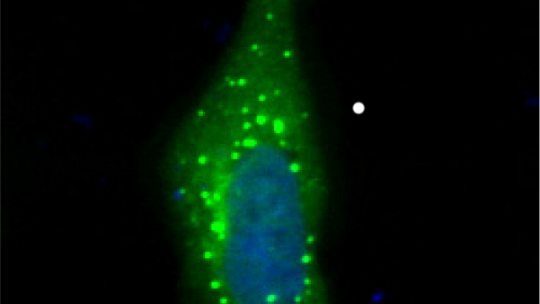 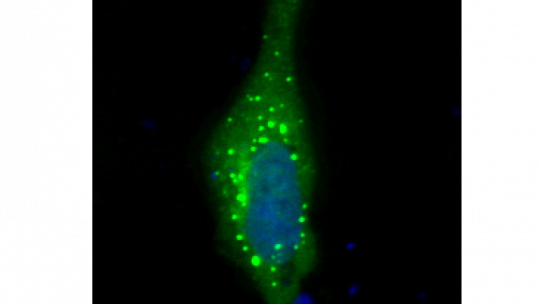 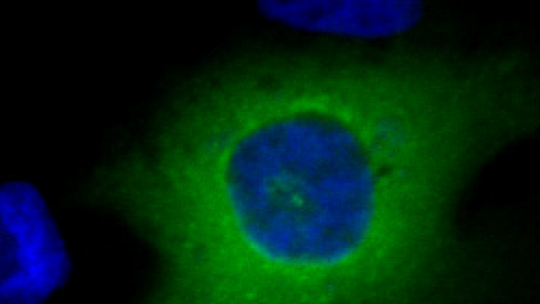 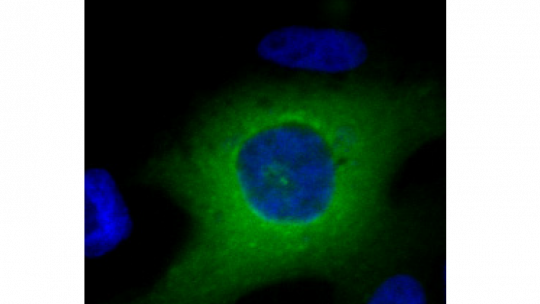 A study at IRB Barcelona sheds light on the dynamics of protein aggregates that behave like “droplets of oil in water” and that are described as membraneless cytoplasmic organelles.

This is the first study at the Institute to address the so-called liquid-like droplets, which are attracting the attention of researchers worldwide.

Liquid-like droplets are highly dynamic cytoplasmic aggregates of proteins with no apparent structure. Over the last two years they have attracted considerable attention due to their key functions in the cell and their relation to several diseases. Although first observed many years ago—Ramón y Cajal detected them—the attention they are receiving is as recent as the name given to describe them. Scientists are intrigued because these protein aggregates, which resemble drops of oil in the aqueous medium of the cell cytoplasm, are relevant for cell activity and regulation—so much so that they are described as being membraneless organelles.

A study published in eLife and headed by the ICREA researcher Raúl Méndez and in collaboration with Xavier Salvatella, both at IRB Barcelona, provides one of the most detailed examples of the regulation of the dynamics of these liquid-like droplets—which in this case comprise CPEB4—during the cell cycle.

CPEB4 is an RNA-binding protein that exerts its activity in the cytoplasm by activating or repressing messenger RNA (mRNA) translation to proteins. Previous work by the group described how CPEB4 regulates the timing of the expression of cell division regulators.

Among other features, CPEB4 is characterized by having unstructured sections, that is to say regions of the proteins that remain unfolded, which are responsible for mediating the development of liquid-like droplets and the regulation of the same during the cell cycle.

Jordina Guillén-Boixet, a postdoc fellow in Méndez’s lab who will shortly be taking up a new position in a lab at the Max Planck in Germany to continue studying liquid-like droplets, has devoted the last seven years to CPEB4 mechanics. These proteins are involved in numerous cell functions and are also associated with neurodegenerative diseases and cancer.

Guillén-Boixet observed that CPEB4 molecules recognize each other through their disorganised regions and bind to form these droplet structuressequestering the mRNAs and hiding it from ribosomes, thereby preventing its translation to the protein. The versatility and dynamics of this aggregation allows it to be easily reversed when the cell needs to translate RNA into proteins.

Méndez’s team has described in depth how the droplets of CPEB4 form and break up and the kinases involved in the phosphorylation of the proteins required to breakdown the aggregates and release mRNA.

In addition to providing insight into how CPEB4 is regulated during the cell cycle, the study strengthens two notions in relation to liquid-like droplets—organelles that have the capacity to regulate protein and mRNA activities and “which were previously thought to be dispersed in the cytoplasm,” says Méndez.

First, the researchers believe that the vast majority of RNA-binding proteins probably form these organelles. “This is the first study that characterises how this process is regulated during the cell cycle for a protein that binds and regulates the translation of a family of mRNAs, and it paves the way for testing other families,” he adds.

The second notion is that only disordered proteins or disordered regions can form protein droplets.

In fact, most human proteins have disordered regions. “Evolution has selected disordered regions probably because they confer dynamics and versatility to proteins—greater speed to assemble and dissasemble interactions—which is advantageous for signalling,” explains Xavier Salvatella, an ICREA researcher at IRB Barcelona who specializes in molecular biophysics and disordered proteins.

“These proteins are not freely floating around the cytoplasm but group in a certain way to form compartments, in a kind of order that enables them to perform cell functions. This is why the increasingly more precise description of these membraneless organelles is so important in biology,” they add.

The IRB Barcelona researchers focusing on liquid-like droplets now make a valuable contribution to the field with the publication of this first result in the prestigious journal eLife. Furthermore, both Raúl Méndez and Xavier Salvatella are now studying how defects in the formation of these organelles can lead to the onset of disease.