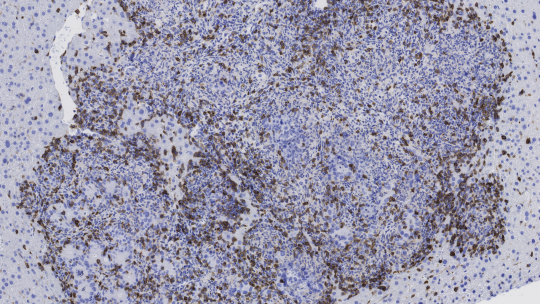 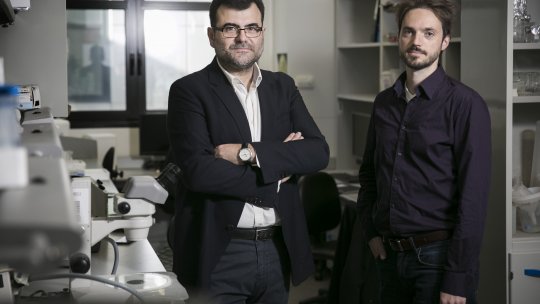 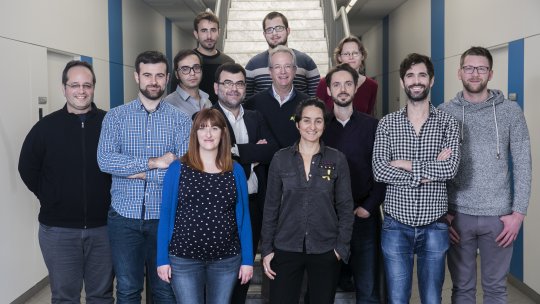 The IRB Barcelona team of researchers that contributed to the article. The study involved collaboration with the chemistry lab headed by Antoni Riera and with the Biostatistics Unit led by Camille Stephan-Otto (M Minocri, IRB Barcelona)

A team headed by ICREA researcher Eduard Batlle discovers that immune system-stimulating treatments combined with a TGF-beta inhibitor are effective against colon cancer.

The researchers developed a mouse model that mimics advanced human colon cancer. This model has allowed them to study the immune system response for the first time.

In a short space of time, immunotherapy, that is to say therapies based on stimulating the immune system against cancer cells, has become a powerful approach to treat cancers such as melanoma and lung cancer. However, to date, most colon tumours appeared to be unresponsive to this kind of therapy. Given this observation, it was hypothesized that this kind of tumour was simply invisible to the immune system. In a study published today in the journal Nature, a team headed by ICREA researcher Eduard Batlle, at the Institute for Research in Biomedicine (IRB Barcelona), explains that the hormone TGF-beta is responsible for the “blindness” of the immune system to colon cancer cells.

“The few clinical immunotherapy trials done in patients with the most common subtype of colon cancer were not giving good results and we didn’t understand why this was happening,” explains Eduard Batlle.

By inhibiting the activity of TGF-beta, the cells of the immune system infiltrate and recognise the tumour, fight the cancer, and even stop colon tumours from metastasizing to the liver and lung in a preclinical mouse model that mimics the human disease. In addition, and more importantly, the researchers have demonstrated that the combination of a TGF-beta inhibitor with available immunotherapies boost the anti-tumour effect, allowing the immune system to efficiently eliminate already established metastases, which would otherwise kill the individual in a question of weeks.

The scientist Daniele Tauriello, postdoctoral fellow and first author of the article, induced four of the most common mutations present in advanced human colon tumours in mice. “The development of the animal model took us four years but we hit the nail on the head,” he says.

After confirming the similarity of the mouse tumours with those in humans, they built a biobank of tumour organoids—3D mini-tumours— to then graft them in a controlled manner in immunocompetent mice. “For studies of the immune system, the tumour has to be of mouse origin otherwise the animal would reject it,” he explains. This animal model, which mimics the main features of metastatic colon cancer in patients, allowed the researchers to examine how cancer cells evade the immune system.

Around 40 to 50% of colon cancer patients relapse in the form of metastasis, with the tumours reproducing mainly in the liver and lung. “When a diagnosed of advanced stage colon cancer is given, oncologists do not have access to efficient treatments to cure the patient,” explains Eduard Batlle.

This study paves the way for the development of the first treatment based on immunotherapy for patients with metastatic colon cancer and for those patients with poor prognosis but who have not yet developed metastasis.

“Oncologists and pharmaceutical companies will soon start clinical assays that combine TGF-beta inhibitors, which are already in clinical use, with immunotherapies. We are convinced that many colon cancer patients will benefit from this therapeutic strategy,” they say.

In the same issue of Nature there is another study that addresses the lack of response of bladder cancer patients to immunotherapy. Conducted by the North American pharmaceutical company Genentech, this study draws the same conclusions as Batlle’s team. “This second study demonstrates that the discovery goes beyond colon cancer. It appears that many types of tumour use the same strategy—increasing the expression of TGF-beta in the environment—to evade the immune system. Patients with these tumours may also benefit from immunotherapies based on the inhibition of this hormone,” say the scientists at IRB Barcelona.

The study has involved collaboration with the chemistry lab headed by Antoni Riera at IRB Barcelona and professor of the University of Barcelona, which synthesised the drug that inhibits TGF-beta activity, and Toni Berenguer and Camille Stephan-Otto, in the Biostatistics and Bioinformatics Facility at the same institute, who validated the similarity of human and mouse tumours. The study also involved the Department of Oncology and Pathology at the Hospital del Mar de Barcelona.

The study received funding from the BBVA Foundation, the Olga Torres Foundation, the Josef Steiner Foundation, the European Research Council, the Ministry of Economy and Competitiveness through ERDFs, the Botín Foundation, and Santander Bank through its Global Santander Universities Division. Eduard Batlle and Daniele Tauriello are also members of the CIBERONC network (Biomedical Research Networking Centre in Oncology), from which the lab receives funds for developing the studies.