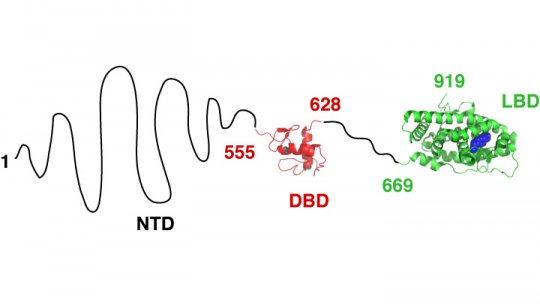 The finding paves the way for the identification of new therapeutic targets for many diseases.

Prostate cancer, Alzheimer’s, Parkinson’s...these three diseases are associated with proteins that share a common feature, namely disordered regions that have no apparent rigid three-dimensional structure. In spite of the potential of these regions as therapeutic targets, it was believed that drugs could not be directed to them. But now scientists at the Institute for Research in Biomedicine (IRB Barcelona) have rediscovered their utility as drug targets. Published in the journal ACS Chemical Biology, the results pave the way towards identifying new therapeutic targets for many diseases.

Xavier Salvatella, ICREA researcher and head of the Molecular Biophysics lab, studies the structure and function of the Androgen Receptor (AR), a protein involved in prostate cancer. Although a slow-growing cancer and with good prognosis (about 70% of patients are cured with surgery), there are many cases in which the cancer cells spread throughout the body. This stage of the disease is commonly addressed by preventing the activation of AR, thereby causing cancer cells to die. However, tumours adapt by becoming resistant to treatments, and currently there are no other treatment options.

“This protein is chameleonic,” explains Salvatella. “Instead of being rigid, it’s highly flexible and dynamic, and these properties allow it to take on many forms.” The AR is a protein that carries out its activity in the cell nucleus, where it regulates gene expression. It has a structured region, which binds to DNA, and an intrinsically disordered region, that is to say without structure. “We know that the disordered region is crucial for the activity of this protein. However, because of the absence of its three-dimensional structure, it was ruled out as a drug target.”

Through high-resolution molecular analysis, the researchers, including Eva de Mol, former "la Caixa" PhD student at IRB Barcelona and first author of the study, discovered that there is a certain degree of structure within the disordered region. “In its natural context, bound to DNA in the cell nucleus, it’s possible that this protein is highly structured, even possibly resembling a conventional therapeutic target,” says Salvatella.

Furthermore, the scientists have observed that an experimental drug against prostate cancer binds to this region. “It’s an important finding because it opens up a whole series of possibilities to reconsider the discovery of drug targets that had previously been ruled out,” says the researcher.

Salvatella is optimistic about the relevance of the findings. “These disordered proteins are crucial in the development of Alzheimer’s and Parkinson’s disease, for example. What we need to do now is to apply this knowledge and begin a systematic search for drugs.” The lab will begin drug screening within two years. “It’ll be difficult to identify drugs that specifically target these regions, but I think it’s achievable and worth the effort.”

This work was supported by the Ministry of Economy and Competitiveness and European Regional Development Funds - ERDF (Government of Spain), La Marató de TV3, CancerTec programme from “la Caixa”, the European Research Council (ERC) and the Government of Catalonia.