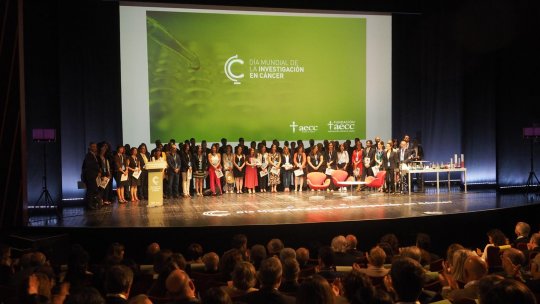 Yesterday, in a ceremony held in Madrid, the Spanish Association Against Cancer (Asociación Española contra el Cáncer (AECC)) announced the scientific projects and researchers who have been awarded funding for the next few years—among them five cancer researchers at the Institute for Research in Biomedicine (IRB Barcelona)

A- AECC Projects. 3 years of funding

Eduard Batlle, ICREA researcher and member of the CIBERONC network, aims to develop new treatments to cure patients with metastatic colon cancer. Each year 1,700,000 new cases of colon cancer are diagnosed worldwide. More than 60% of these cases are diagnosed with advanced stage disease and are at risk of developing metastasis. The researchers in the Colorectal Cancer Lab have developed a sophisticated experimental model that allows them to study the interaction between the immune system and the tumour. This model will serve to speed up the introduction into clinical practice of treatments based on boosting the immune system response to cancer cells.

The study by ICREA researcher Angel R. Nebreda focuses on determining the importance of the protein p38 in myeloid cells (a type of cell that belongs to the immune system) in the growth of primary melanoma and metastasis of the melanoma to the lung. The researchers will also perform pre-clinical studies using mouse models of melanoma to validate the potential of p38 inhibitors to strengthen the immune system and thus to treat metastatic melanoma. This project could t benefit patients with advanced melanoma. Metastatic melanomas account for 2% of malignant tumours and the number of cases reported is increasing by 10% each year.

About 20% of patients with luminal breast cancer relapse in the first ten years, and patients with metastasis have an expected survival of 30 months. One of the key steps in cancer development is the loss of activity of the retinoblastoma (RB) tumour suppressor. Led by Francesc Posas, director of IRB Barcelona, head of the Cell Signalling Lab at the same centre, and professor of the Universitat Pompeu Fabra, this project aims to further the development of new therapeutic tools for breast cancer and to overcome resistance to current treatments. The lab, which is co-headed by the scientist Eulàlia de Nadal, will study a new mechanism of RB regulation with the aim to determine the impact of this mechanism in breast cancer and will test new compounds that mimic the capacity of this mechanism to block cancer cell division.

The team headed by ICREA researcher Roger Gomis, who is also a member of the CIBERONC network, will participate in a translational project coordinated by Arkaitz Carracedo at CIC bioGUNE and involving five multidisciplinary groups. Gomis will be providing the project with expertise in the study of the genetic and molecular bases of metastasis.

Marta Kovatcheva, postdoctoral researcher in Manuel Serrano’s lab at IRB Barcelona, is conducting research into how to prevent the lung cancer relapse after treatment. Kovatcheva is studying a small group of cells—called cancer stem cells—with the capacity to reproduce the tumour. The project seeks to identify new treatments to eliminate these cells, thereby preventing their persistence and proliferation.

The scientist hopes that the results from this research will decrease the risk of patient relapse after treatment.

IRB Barcelona, acknowledged by the AECC