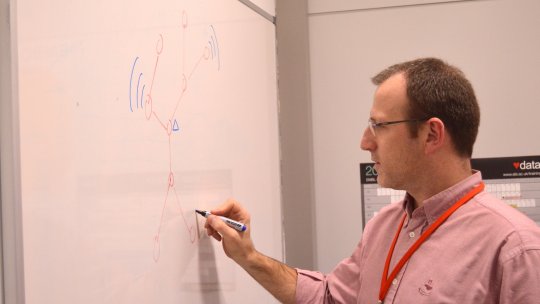 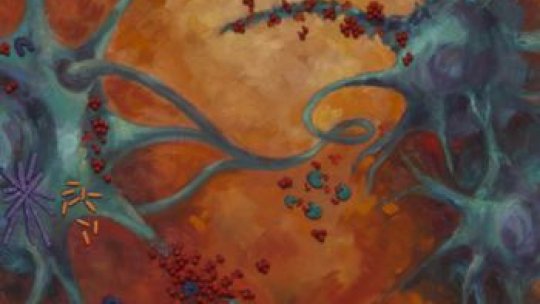 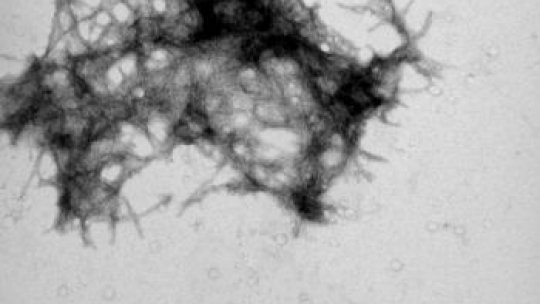 Amyloid fibrils are the main component of the plaques. (Copyright: Carulla, IRB Barcelona)

Alzheimer’s disease has no cure and virtually no palliative treatments are available. Even today its origin is still unknown. All this has driven the international scientific community to back new approaches that allow early diagnosis of the disease and the discovery of a treatment to stop its progression. IRB Barcelona is not oblivious to this tendency. The researchers Patrick Aloy and Natàlia Carulla head projects addressing an alternative slant on the control and progression of the disease and the discovery of new therapeutic agents.

The Spanish Society of Neurology estimates that 600,000 people are affected by Alzheimer’s disease in this country. Of these, 112,000 cases are in Catalonia, according to data collected by the Catalan Government. These figures will increase in the coming years. The international scientific community and the pharmaceutical industry recognizes that the increase in life expectancy, the lack of knowledge about what triggers the disease, and the lack of effective treatments—99.6% of treatments have failed, according to a study by the Cleveland Clinic—fuel this bleak panorama.

However, in spite of this perspective, the scientific community is not prepared to throw in the towel. After years attempting to decipher the mechanism responsible for the formation of senile plaques in the brain—a process caused by the aggregation of the beta-amyloid protein and that leads to neuronal death and the loss of memory, language, emotional control and the ability to reason and make rational decisions—scientists from all over the world have readjusted their strategy in order to identify new therapeutic targets, as well as new markers for early diagnosis and more precise monitoring.

In this regard, the Institute for Research in Biomedicine (IRB Barcelona), has launched research that falls in line with this new orientation. On the one hand, Patrick Aloy, ICREA researcher who holds a Consolidator Grant from the European Research Council, is heading investigation into the best markers for the early detection of Alzheimer’s disease. On the other hand, Natàlia Carulla, “Ramón Cajal” researcher funded by the Alzheimer’s Association of the United States, is addressing the aggregates of the beta-amyloid protein with the aim to identify key molecules that halt the progression of the disease.

Delving into the origin

One of the hallmarks of Alzheimer’s disease is the progressive aggregation of the beta-amyloid protein in the brain, a process that results in the formation of senile plaques in the brains of those affected. These plaques comprise fibrillar aggregates of the beta-amyloid proteins, known as amyloid fibrils. These observations led scientists to propose that the amyloid fibrils were the causal agents of the disease. However, it has been observed that the levels of amyloid plaques in the brain and the severity of the disease are not directly proportional over time. New hypotheses point to the smallest aggregates formed before the development of the fibrils as being responsible for neurodegeneration.

To corroborate these hypotheses, it is necessary to determine which of the multiple forms adopted by beta-amyloid during aggregation are the most toxic and how they exert this toxicity. “This lack of knowledge,” says Natàlia Carulla, “is one of the reasons explaining the failure of clinical trials to halt the progression of the disease”. Dr Carulla works in the Design, synthesis and structure of peptides and proteins group.

The preliminary results of her research at IRB indicate that various structural patterns of the beta-amyloid aggregates could be responsible for neuronal death. Confirmation would pave the way to studying how this type of aggregate affects neurons, which would produce crucial information for the search for new therapeutic molecules that prevent their formation or even induce their breakage.

“In all likelihood,” explains Patrick Aloy, leader of the Structural Bioinformatics and Network Biology lab, “the factors mentioned depend on a network of interactions between genes and proteins that result in a physio-pathological outcome. Unravelling these networks or interaction maps will allow us to understand how the disease develops and to identify the best molecules for monitoring purposes and interventions to halt its progression”.

Using an approach based on Network Biology and biocomputational techniques, Aloy aims to bring together in a single map the distinct cellular and physiological processes involved in the amyloid pathology and mitochondrial dysfunction, aspects that have until now been addressed separately. This joint approach should allow us to find new molecular biomarkers—which are practically non-existent—and therapeutic targets.

This is one of the branches of SysPharmAD project, which the European Research Council has awarded 1.3 million euros over five years. In the first phase, the projects aims to determine in the stage of the disease of animal models in order to later build a computational model for extrapolation to humans. This dynamic model will allow representation of the development of the disease at the molecular level, thus leading to a greater understanding of its origin and progress and allowing the identification of molecules for monitoring purposes or for the development of drugs that can block them.