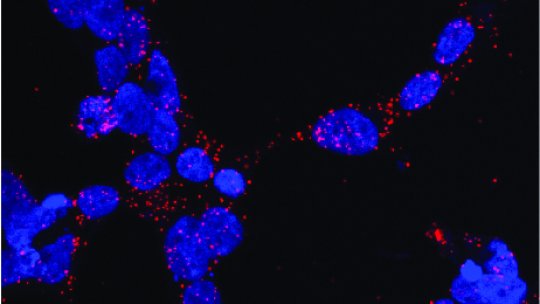 Activation of the chaperone protein Hsp70 leads to a decrease in the formation of androgen receptor aggregates, which give rise to muscular atrophy in patients with Kennedy´s disease, a rare condition for which no treatment is available.

The results may also be useful in the search for a treatment for castration-resistant prostate cancer, a disease that causes 30,000 death a year in Europe and for which there is no treatment.

A study led by scientists at the Institute for Research in Biomedicine (IRB Barcelona) and published in Nature Communicationsproposes chaperone protein Hps70 as an attractive therapeutic target for the treatment of Kennedy’s disease—a rare neuromuscular condition—and of castration-resistant prostate cancer.

Kennedy´s disease is caused by a mutation in the androgen receptor. This receptor serves as a sensor of testosterone, detecting the levels of this hormone and activating the genes responsible for male traits. But in patients with this disease, the mutated receptor shows an altered structure, as demonstrated by this lab in a previous study recently published in the same journal, and it forms aggregates that damage muscle cells and causes muscular atrophy or wasting.

Chaperone proteins are one of the mechanisms through which the formation of toxic protein aggregates is prevented. These chaperones bind to other proteins in order to facilitate their correct folding, assembly and transport, as well as regulating their degradation. “But we didn’t know the role of these chaperones in the regulation of the activity, cell concentration and solubility of the androgen receptor,” says ICREA researcher Xavier Salvatella, head of the Laboratory of Molecular Biophysics at IRB Barcelona.

Using a sophisticated biophysics approach, nuclear magnetic resonance (NMR), and experiments with human cell cultures, the scientists discovered that the chaperones Hsp40 and Hsp70 bind strongly to a region of the androgen receptor that is susceptible to forming toxic aggregates. This interaction between the chaperones and the receptor prevents the formation of these deposits and facilitates their clearance.

To confirm whether the increase in the activity of these chaperones decreases the formation of toxic aggregates and whether these proteins are therefore useful for the treatment of Kennedy`s disease, the scientists performed experiments in mouse models. These experiments were done in collaboration with the labs of Professors Jason E. Gestwicki and Andrew P. Lieberman from the University of California San Francisco and the University of Michigan, respectively.

“The results obtain in mice confirm that compounds that activate Hsp70 lead to a decrease in the formation of the aggregates,” says Salvatella. “Therefore the chaperone Hsp70 emerges as a possible therapeutic target for Kennedy’s disease,” he goes on to say.

The results may also be useful in the search for a treatment for castration-resistant prostate cancer, the most advanced stage of this kind of cancer, which causes 30,000 deaths a year in Europe. In cells resistant to current treatments, the binding site of Hsp40 and Hsp70 in the androgen receptor is not altered, and therefore these chaperones may also serve as a therapeutic target in this disease.

The study has been supported by the European Research Council, the Ministry of Science, Innovation and Universities (previously MINECO), the Obra Social ”La Caixa”, AGAUR, and the  “Fundació La Marató de Tv3”.

Hsp70 and Hsp40 inhibit an inter-domain interaction necessary for transcriptional activity in the androgen receptor.