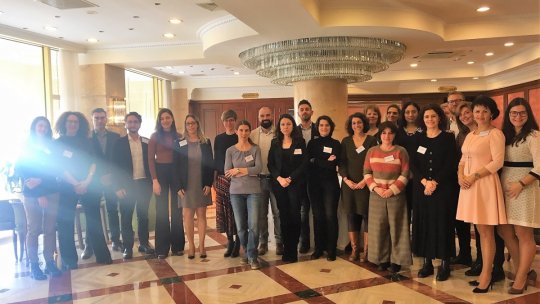 Kick-off meeting of the CALIPER consortium held in Thessaloniki (Greece) in January 2020.

Committed to fostering gender equality policies, IRB Barcelona participates in the EU-funded CALIPER to implement a Gender Equality Plan and thus fulfil gender mainstreaming as a strategy of organisational development.

In order to prevent gender discrimination in scientific institutions, CALIPER aims to promote a universal methodology that provides permanent support for gender equality.

The European Union is placing increasing importance on promoting programmes that tackle gender inequality at all levels of society, including scientific and research institutions. Committed to this endeavour, IRB Barcelona has joined the EU-funded CALIPER project, which intends to support the transformation of research institutions to more gender-equal entities by increasing the number of women researchers in STEM (science, technology, engineering and math), thereby enhancing their career perspectives and adding a gender dimension to research. CALIPER aims to design a universal methodology that supports gender equality on a permanent base and prevents gender discrimination in scientific institutions.

CALIPER is formed by a consortium that includes seven research institutions and two research funding organisations. The partners involved share a common goal, namely to implement a Gender Equality Plan that covers an extensive area of the EU (Southern Balkans, Central Europe and Baltic countries).

The consortium also includes two small to medium-sized companies, which take care of the coordination and scientific management of the project, and a professional association, whose role is to disseminate the project results. Allocated a budget of € 2,896,475 over 4 years, CALIPER started in January 2020 with a kick-off meeting held in Thessaloniki, Greece.

An organisational transformation through a gender perspective

By participating in CALIPER, IRB Barcelona’s main objective is to achieve gender mainstreaming through a Gender Equality Plan, which will be developed and implemented throughout the project. IRB Barcelona’s involvement in CALIPER will support its own institutional environment and transformation in gender perspectives by fostering accountability and by strengthening the commitment of key actors of the institution, at all levels (Human Resources, Equality and Diversity Committee, Directorate and Managerial positions, Researchers and Administration).

In addition, IRB Barcelona aims to share and transfer the knowledge and expertise acquired during the project with other local and national stakeholders, both from the public and private biomedical sectors, as well as with specific associations committed to gender equality in STEM in Spain.

All the activities of CALIPER at the Institute will be coordinated by a core team* and implemented and supported by a Gender Equality Plan Working Group**. In the first stages of the project, this team has started conducting internal and external assessments involving different groups of staff and including deskwork, interviews and surveys. These activities will be conducted over several months.

Although the COVID-19 health crisis is delaying initiation of the most relevant activities of the project, the team at IRB Barcelona is excited about the prospect of starting their work soon. In the meantime, IRB Barcelona continues to pave the way for the implementation of gender equality and diversity procedures and policies through its Equality and Diversity Committee, as stated in a recent interview with one of its members.

IRB Barcelona expects that the expertise in Gender Equality, but also in Equality and Diversity, gained through CALIPER will greatly serve its strategy to empower both its community and the institution as a whole.