At IRB Barcelona we have a Plan 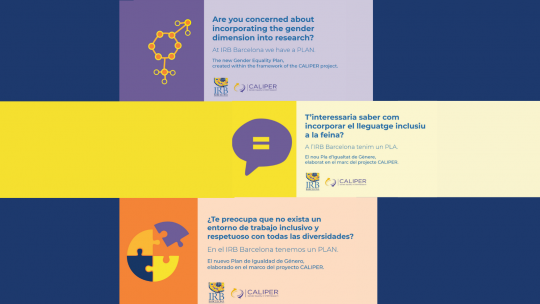 In the 21st century, you might think that an international research centre like IRB Barcelona does not need measures to guarantee equality and diversity. However, the reality is that we still have a way to go to ensure more diverse, equitable, and inclusive science. Ending inequalities and discrimination based on gender or other social identities in biomedical research is a milestone that we want to help achieve.

Last year, within the framework of CALIPER Project and supported by the Equality and Diversity Committee and a team of internal and external collaborators, the project work team evaluated a range of aspects associated with equality. In this regard, the evaluation covered areas related to governance, human resources. communication, research, harassment, and intersectionality.

After a few months of working with a variety of approaches, including an internal study, focus groups, surveys, and interviews, it has been concluded that some areas require improvement, and 24 actions have been drawn up in this regard.

The 24 actions are framed within the aforementioned areas. Examples include the development of an inclusive language guide, a work-life balance guide, the updating of the harassment protocol, the maintenance and improvement of mentoring programmes and training sessions on the inclusion of the gender dimension in research. These actions have been validated at the institutional level by all the parties necessary for their successful implementation.

To begin with, one of the first actions of the Gender Equality Plan in the coming months is to inform the IRB Barcelona community about it in depth. For the plan to be successful, all members of the Institute must be engaged with it and embrace it, thus allowing its fruits to be reaped over the next four years.

Through an official online presentation of the 2021-2025 Gender Equality Plan on 24 November, followed by a round table on mentoring, we want to make the plan (which you will definitely be hearing more about over the next 4 years) known.

At IRB Barcelona we have a plan: the Gender Equality Plan, which has been drawn up within the framework of the CALIPER project.